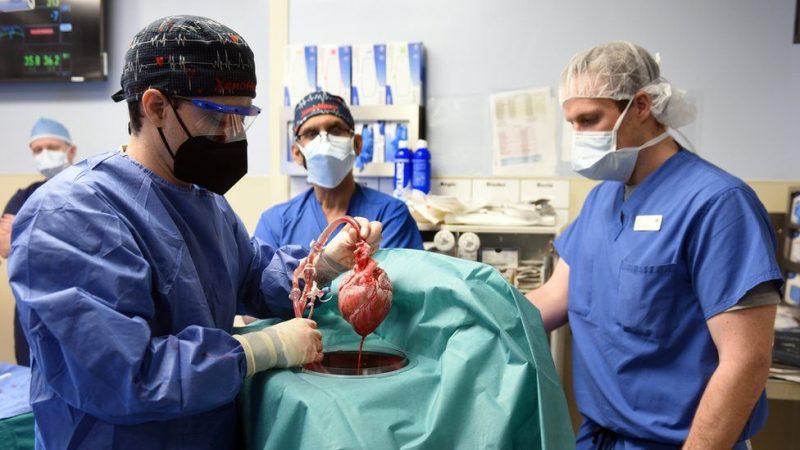 Transplants have been done for more than a century, but the history of organ transplants seems to offer many more extraordinary and disruptive events. Everything seems to indicate that the organ transplants of the future will not be very similar to the ones we know today.

The first and last milestone in the history of human transplants begins with a pig. In 1906, Mathieu Jaboulay, a French surgeon, performed the first such operation: he grafted a portion of a pig’s kidney into the elbow of a patient who had liver failure. The patient died after three days.

At the beginning of this 2022, David Bennett, 57 years old and with terminal heart disease, became the first person to receive a heart from a pig. The intervention took place on January 6, 2022 and David died on March 8.

Transplantation of animal organs into humans, or xenotransplantation, is one of the innovations that may become a medical reality in the coming years.

Nearly 20 people die per day in the world waiting for a transplant. According to Incucai, there are more than 7,000 people on the waiting list for a transplant in Argentina, but only about 2,000 interventions are carried out. Therefore, it is to be expected that many of these patients will not receive the organ they need in time.

Although it seems like “first world” science, Argentine scientists and doctors have been working on these procedures for some years.

Argentina was the second country in the world to conduct clinical trials for the transplantation of pig pancreatic islet tissue in patients with type 1 diabetes. Pig tissue has the ability to produce insulin.

But the islets are structures less than a millimeter and the implants were encapsulated to prevent rejection. In the case of the heart donor pig, the animal was modified with 10 human genes to reduce immune rejection and to slow the growth of the implanted organ.

Laura Ratner, Conicet researcher, assured that the intervention achieved in the USA can revolutionize the world of transplants. “One might think that the monkey is closer to the human, but over the years it was determined that the most optimal model is the pig because it is easier to raise, has larger litters and its organs are physiologically similar,” explained.

In the 1980s cyclosporine, an immunosuppressant that reduces organ rejection, was a before and after in transplants. Now, the technique Crispr-Cas to make genetic edits to DNA is the key milestone in the evolution of xenotransplantation.

In Argentina there are two groups that are on the verge of obtaining the first genetically modified animals with organs suitable for transplants into humans.

A new legal and bioethical framework

Beyond the technology, the Argentine authorities are also studying the regulatory framework for these interventions. Since 2019, a working table has been operating with various ministries and sectors of society.

Dalia Lewi, an expert on genetically modified organisms, explained that Anmat is the body that should authorize these animal organs as “biomedical products” and that they are evaluating whether a specific law on xenotransplantation is needed. The expert also assured that it addresses bioethical aspects.

3D printing of organs for transplantation

Another alternative, at an even more experimental stage, is the 3D printing of organs. This technology started with the use of plastic as “ink”, but then metal printers and other materials emerged. For some years there have been “bio-inks” that allow printing from a vegan steak to cartilage or skin.

In the case of organ printing, the bioink is made from patients’ cells that are genetically reprogrammed to become stem cells that can then grow into the desired tissue. Thus, rejection would be reduced to almost zero, since they would be cells from the same patient.

But printing an organ is nowhere near as simple as a plastic object. One problem is gravity, as hollow organ bioprints collapse. That’s why many of these experiments are done on the Space Station, where this physical force is minimal. Another alternative is to use a support made of a hard, biocompatible material.

The first successful trials were already done in animal models with transplanted printed skin. And some researchers managed to print blood capillaries.

In 2018, a team from New Castle University managed to print the first human cornea, and in 2019 another group from Tel Aviv University printed a mini heart from the cells of a heart patient.

Although it may not seem like it, printing a heart can be simpler than any other organ, because it is almost all muscle tissue. In contrast, a lung or kidney is made up of several types of tissue.

Finally, in addition to printing it, the manufactured organ must be 100% functional and synchronize its activity with the rest of the organism.

Experts believe that the first use of organ and mini-organ printing will be research to test new therapies and drugs. They are a better model than fabrics in vitro or laboratory animals, and safer and more ethical than testing it on humans.

Transplants of the uterus and other parts of the body

The most transplanted organs are kidney, heart, liver, lungs and corneas. But in recent years, surprising interventions have been achieved:

In relation to uterus transplants, in Argentina there are several teams that are already refining the technique in animal models to make the leap to humans. Martín Maraschio, head of the transplant program at the Private Hospital of Córdoba, integrates one.

The professional recognizes that the uterus is a non-vital organ and that the intervention competes with other ways of being a mother, such as adoption and surrogate pregnancy. “An ethical dilemma arises because it is the riskiest way to be a mother compared to the other two alternatives. It even puts the unborn baby at risk,” he warns.

The intervention could also allow trans women to become pregnant. “It is a very complex technical challenge, but it has always been in the mind of those who created this technique. And, surely, there will be an ethical debate in a few years”, says Maraschio.