The story of the 20-year-old girl Elena Huelva has caused a social impact after her death. The writer and influencer battled Ewing’s sarcoma, a tumor that mainly affects teenagers and young adults, for four years 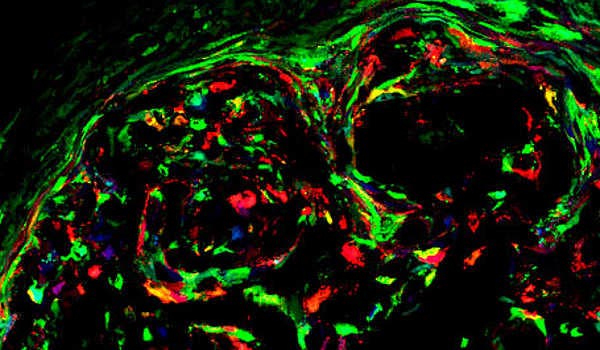 Stained cells from an osteosarcoma. Photo taken from the study of the Carlos III Institute of Health (IIER-ISCIII).

The Ewing’s sarcoma is a malignant bone tumor that forms in bone or soft tissue. It mainly affects teenagers and young adults, as in the case of the influenceer Elena Huelva and a few months ago to the young man tiktoker Carlos Sarria

This type of tumor has a predilection for the long bones of the limbs or those of the pelvis, points out the Spanish Society of Medical Oncology (SEOM).

In some cases it can lead to metastasis, which usually occurs in the lung or bones, such as those of the spine.

What are the causes?

Ewing’s sarcoma is a cancer genetically characterized by the fusion of areas of two genes: EWSR1-FLI1. It originates from cells from one of the layers of embryonic development called mesoderm, as explained by Spanish Association against Cancer.

And although the exact causes of this type of tumor are not yet known, certain genetic alterations have been found that relate it.

Although bone sarcomas are generally uncommon, Ewing’s sarcoma is the second most common bone tumor in children and adolescents.

According to the Spanish Association against Cancer, an annual incidence of 2.93 cases for every million inhabitants.

In terms of prevalence, it is higher during the twenties, with ends 9-10 cases per million inhabitants per year.

The presence of this cancer in children under the age of five and in people over thirty is very rare.

Although it does not have a large number of symptoms or even in some cases they do not manifest themselves, the American Society of Clinical Oncology mention certain signs to which it is important to pay attention:

In the face of any of these symptoms, it is important to consult a specialist, since in the event that it is finally a tumor, an early diagnosis will allow an approach with a more favorable prognosis.

How is Ewing Sarcoma diagnosed?

In order to diagnose this type of sarcoma, the SEOM aims to carry out different tests tests:

What does the treatment consist of?

The treatment of Ewing’s sarcoma must be multidisciplinary, as it requires several resources at the same time.

It will combine the neoadjuvant chemotherapy (administered to reduce the size of the tumor before the main treatment), la surgery and in some cases, also the radiotherapy.

The prognosis of the disease will depend on whether or not there is metastasis, since it leads to a worse prognosis; the location and size of the tumor; of response to treatment; and of ledad

Despite having overcome the disease, the follow-up of these patients must be prolonged, since most relapses take place during the first five years.

Regarding the survival ratethe Spanish Association against Cancer points out that it has been increasing in recent years, thanks to the multimodal treatments (chemotherapy, surgery and radiotherapy). It has gone from a survival to five years of the 44% in the 68% and at the age of ten 39% in the 63%.