The plant cell is a eukaryotic cell because it has a definite nucleus. Its main function is to produce its own food using sunlight, in the process of photosynthesis.

Plant cells are composed of cell wall, plasma membrane, nucleus, cytoplasm, plastids, and other organelles, which will be described below. 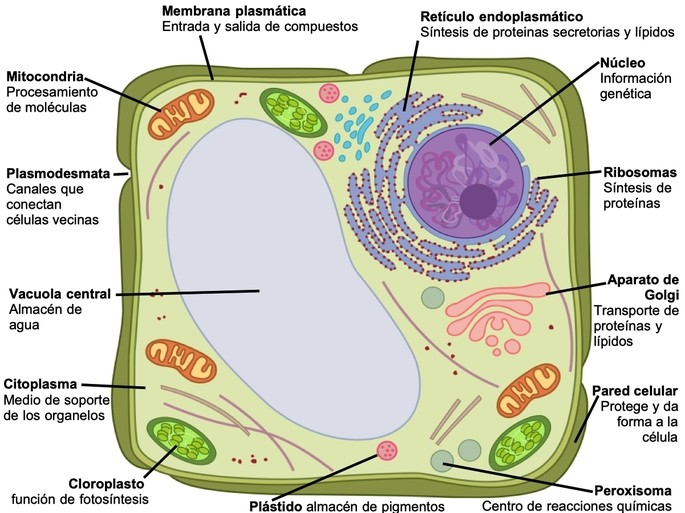 The inner membrane and outer membrane of the nuclear envelope fuse in certain areas to form open corridors or nuclear pores. Several molecules pass through these openings between the nucleus and the cytoplasm.

Inside the nucleus are the nucleolus, Cajal bodies, photocopes, and the genome. The latter is organized into chromatin, which is an association of DNA and proteins.

The endoplasmic reticulum is responsible for several important processes, such as the synthesis of secretory proteins and essential lipids, the storage of calcium and hormone signal receptors.

The Golgi apparatus is the organelle responsible for acting as an intermediary in the transport and processing of proteins and lipids, from the endoplasmic reticulum to the extracellular space or central vacuole.

The plasma membrane is found in all cells of living things. It determines the boundaries of the cell and the separation of the outer space from the inner cell. In addition, it allows the passage and exit of specific compounds, according to the needs of the cell.

The plasma membrane is made up of two overlapping layers of lipids or a lipid bilayer, where the main lipids are phospholipids. Other lipids in the plasma membrane of the plant cell are glucocerebroside, galactosylglyceride, campesterol, sitosterol, and stigmasterol.

Floating among phospholipids is a wide variety of proteins, which act as channels, signal receptors, ion pumps, and recognition proteins.

The plasma membrane of the plant cell produces tubes that pass through pores in the cell wall and establish communication with other cells.

The cell wall of the plant is the protective organelle of the plant cell. It is on the outside outside the plasma membrane. It is made of cellulose, a polymer of many glucose molecules that bind together.

The cell wall is a flexible but strong covering that shapes the cell. Cellulose forms the beams of the cell wall, glued together by pectin and hemicellulose. This composition allows the cell wall to grow, expand, and adjust to mechanical stress.

Many substances are secreted in the cell wall, such as nutrients, hormones, enzymes and peptides, which move through the wall to neighboring cells.

A vacuole is a membrane sac inside the cell where contents are stored separate from the cytoplasm. The plant cell is characterized by having a vacuole that occupies much of the cell space, known as the central vacuole. It is separated from the cytoplasm by a simple membrane called a tonoplast, 10 nanometers thick, which controls the entry and exit of water from the vacuole.

The main function of the central vacuole is to store water. Then, water-soluble pigments such as anthocyanins accumulate in vacuoles of epidermal cells and impart the purple, red, and blue color of many petals and leaves. Seed vacuoles are adapted to store protein.

The vacuole is the site of detoxification of harmful molecules, accumulates chemical compounds to defend the plant against herbivores and controls the turgidity of the cell. It is essential for the balance of pH and ions. Its size is controlled by the plant hormone auxin.

Endosomes are the vesicle compartment of the cell. It consists of small spheres or membrane bags that enclose various contents.

Endosomes act as a storehouse of substances, in the remodeling of the plasma membrane and the regulation of the transit of proteins and lipids into the system of inner membranes.

Unlike the animal cell, the plant cell combines new and mature endosomes in the network of membranes that continue in the Golgi apparatus.

Plant cells accumulate lipids in their cytoplasm as small droplets or droplets. They consist mainly of a hydrophobic center of triglycerides or sterol esters surrounded by a monolayer of phospholipids that originate in the endoplasmic reticulum.

In plants, lipid droplets are commonly associated with oilseeds and fruits, from which “vegetable oils” are extracted.

Plastids are dynamic and varied organelles. The most studied is chloroplast, which we will describe later.

Plastids synthesize chlorophylls, carotenoids, fatty acids, and other lipids. They can be characterized in different groups according to their color and structure:

You may also be interested in seeing parts of the flower. 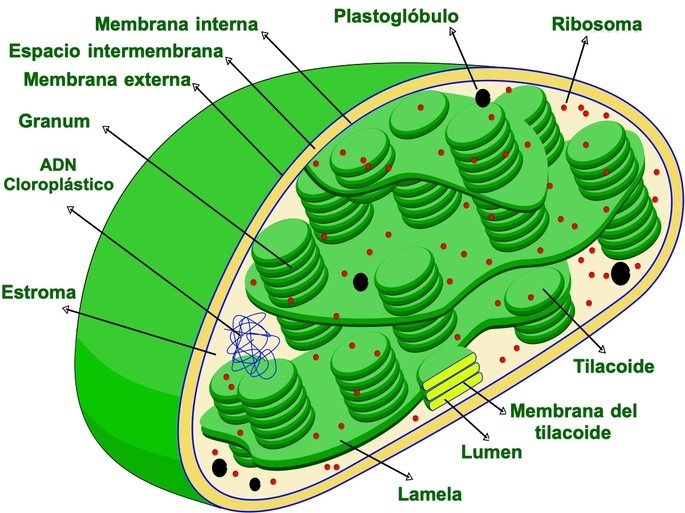 Chloroplasts are the organelles of the plant cell responsible for photosynthesis. They contain chlorophyll, a green pigment, which gives the characteristic color to the leaves and stems of plants. They belong to the plant cell family of plastids, which are found in green algae, lichens, mosses and higher plants.

Chloroplasts use carbon dioxide and water, in the presence of sunlight, to produce simple sugars that are the food source for the plant.

The typical chloroplast is round and flat about 5-10 micrometers in length, with an inner membrane and an outer membrane. The inner membrane closes the stroma, where the thylakoids are located:

The chloroplast maintains its own genome with 120 genes needed for its activities. These are responsible for the synthesis of compounds such as amino acids, phytohormones, nucleotides, vitamins and lipids.

On the other hand, chloroplast detects environmental conditions and synthesizes compounds that allow plants to cope with environmental stress, such as changes in temperature, salinity, and drought. Chloroplast has also been shown to act in the plant’s defense mechanisms against the attack of biotic agents, such as insects, fungi, viruses and bacteria.

In plants, mitochondria provide energy molecules in the form of ATP (adenosine triphosphate) in the cytoplasm. In addition, some amino acids, nucleic acids, lipids and plant hormones are processed in these organelles.

Mitochondria in the plant cell also control the balance of chemical oxidation and reduction reactions and play a role in cell signaling and disease resistance.

The plant mitochondrion resembles the animal in which it contains two membranes: internal and external. Some parts of the inner membrane bend to form sacs called ridges.

A ribosome is made up of two subunits called 40S and 60S. Each of these subunits comprises RNA ribonucleic acid and proteins.

The peroxisomes are small, 1-2 micrometers in diameter, usually spherical. They can be associated with droplets of lipids, plastids, mitochondria and endoplasmic reticulum.

The amount of peroxisomes depends on the cell type, the state of development, and the environmental conditions. For example, under stress, the number of peroxisomes increases.

Peroxisomes in the cell are essential during early development, when the seedlings depend on lipid breakdown before photosynthesis can begin.

Plasmodesmata are pores that provide continuity of the plasma membrane and cytoplasm through the cell wall. With external diameters ranging from 25 to 50 nanometers and extending to the width of the cell wall and are present in some groups of algae and in all terrestrial plants.

Plasmodesmata are essential for plant growth, allowing the intercellular exchange of many molecules.