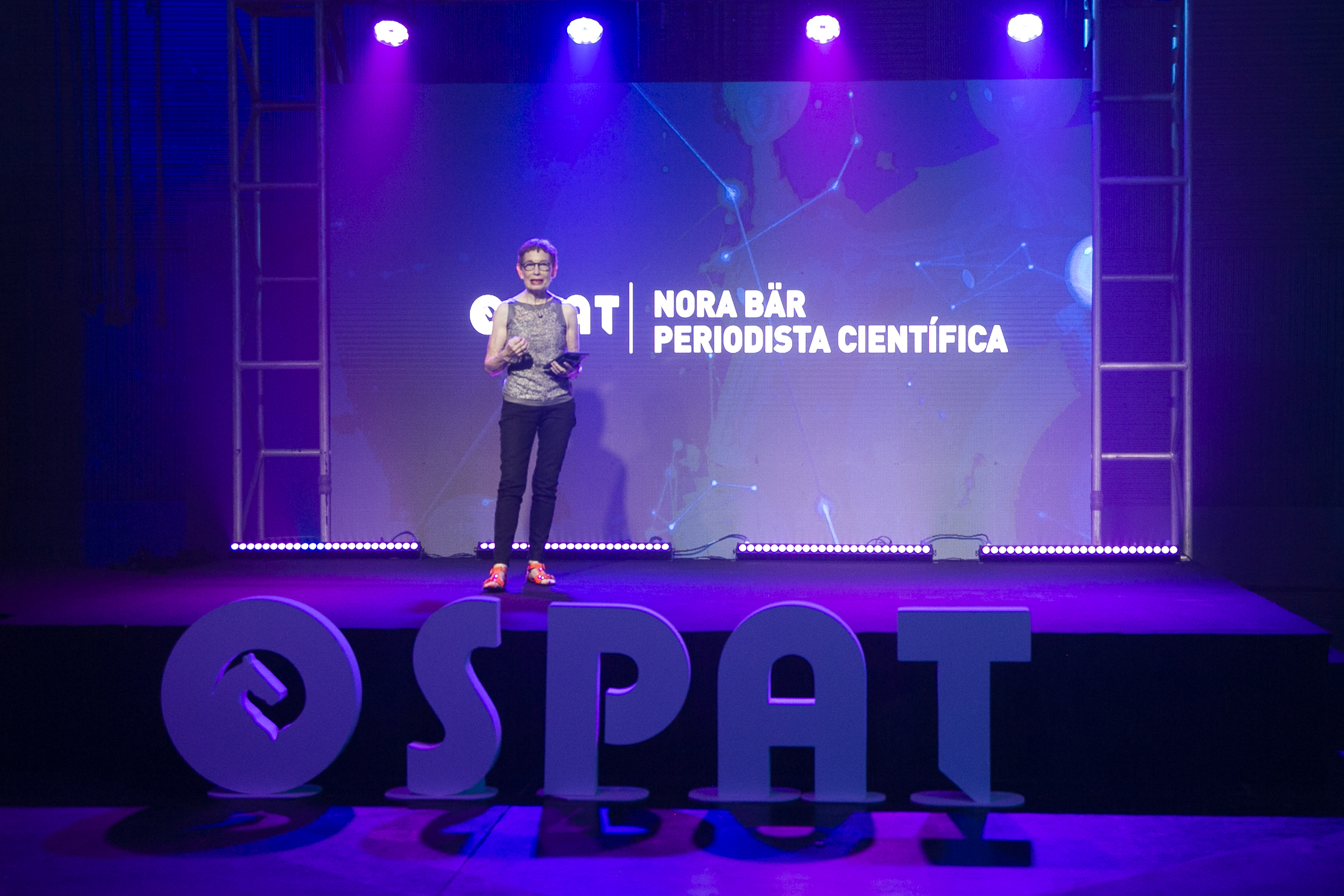 “I am a journalist specializing in health, science and technology. And now there is so much talk about innovation, especially the new, all the things that appear every day and these innovations are duplicated… I also like to look a little to the past, how all this evolved and as one of sometimes it is hard for him to take in the dimension of the vertigo with which not only technologies, but also culture, are changing.

And 50 years ago it was believed that diseases were transmitted by miasmas of stagnant water, by storms, by wars, by cataclysms… nothing was known about biology, physiology, the human body. Microbes were unknown, they did not know what caused disease.

We all carry a very powerful computer – much more powerful than the one traveling on Apollo – in our pocket. And we can communicate with image and sound with any point on earth. There is WiFi all the way to Everest. On Everest there are also accumulations of climbers who communicate – while they are there, at 8 thousand meters high – with the bases.

There is machine learning and there are robots, autonomous vehicles. Genomes are edited – in fact one of the last Nobel Prizes was awarded to two researchers who developed a very fast and very simple technique to edit genomes.

And feats of science and technology are ubiquitous. All these innovations that are seen every day seem almost routine. Life expectancy here in Argentina went from less than 30 years, sorry… in recent times, from 30 years to 77.

People’s rights to literacy were recognized and thanks to universal vaccination, a horrible disease like smallpox was definitively eradicated. And the same thing is about to happen with another terrible scourge, which is polio, which at the moment only persists in 2 countries.

It is clear that we have the pandemic, but the pandemic also helps us to become aware of the advances in science and technology. Vaccines, which used to take decades to develop, last year were developed in less than a year, in months. In months they were available and we are using them.

So, in decades, almost a little longer than a human life lasts at this point, we went from precarious hospitals with dirt floors like those that were there perhaps at the beginning (when the City of Buenos Aires was founded, where they were directed by the Fathers, by the priests and where healers, talkers worked…), a medicine of impressive development was passed.

Both in scientific knowledge and in the application of technologies that dazzle us.
We have robots that do surgeries. The secrets of the organ, considered by some to be the most complex object in the universe, are being revealed. We can name Luis Agote, who solved the problem of blood transfusion by avoiding coagulation, we can name Julio Maiztegui, Salvador Massa, Julio Palmaz, who invented or developed nothing less than the stent. All of them, Argentines. And at the same time that all these technological entrepreneurships were developed, they were incorporated and contributed to the treatment of patients.

Telemedicine is already almost a routine word and more since the pandemic. He did something that is a daily practice.

And a little while ago, just a couple of weeks ago – they don’t reach 2 weeks – there was an Argentinian who was coming to do the first trial in Antarctica of a system called Tempus Pro, which is used to monitor, diagnose and suggest remote treatments to, no less than astronauts.

The technologies that brought humans into space gave rise to all kinds of tools. To mention just one, it gave us the sensors that made it possible to think about electrocardiograms.

But beyond these wonders that surprise us and that we talk about in our articles, and in the newspapers and on television and on the radio, what seems important to me at this moment and on this occasion is to notice that at the same time they were produced all these technological changes that allowed us to advance in our treatments, this also entailed a cultural change.

Today the patient is no longer so “patient”. All Google search engines can show – and do show – and those who study us, what are the most frequent Google searches. It is already well known that the number 1 search in many countries is the search for health.

Several years ago, Angelina Jolie wrote a letter saying and explaining why she had decided to have a radical mastectomy.

This letter was published in all the media of the world, it was a central theme of the programs of the afternoon. And the doctors were telling us reporters that they had spent years trying to keep the breasts of women who had breast cancer, and suddenly a number of women would come to the office, who had had or were being treated for breast cancer , and they were asking for the mastectomy that Angelina Jolie had opted for.

Health systems are at a crossroads, because they became more and more complex… patients who live longer do not always live better, there is a 20 or 30 year survival in which people will require a lot of medical care. And they are designed in such a way that, even if the technologies multiply, there is often no scope.

A couple of years ago when there was a World Health Organization meeting, in Kazakhstan commemorating the 40 years of Anima-Ata’s declaration on primary care, on primary health care, I was able to interview the Indian Shekhar Saxena.

Shekhar Saxena was the director of the Mental Health arm of the World Health Organization. In 2001 he published the first Atlas of mental illness and was the former director of the Department of Mental Health and Substance Abuse of the WHO. With Saxena we discuss the need to address mental health issues. And I remember that on that occasion, as a joke, I told him “well, in Argentina we don’t have this problem because we have an overpopulation of psychologists and psychoanalysts”. And he told me “don’t believe it, not even if all the psychologists or psychoanalysts were to be on call 24 hours a day, they would be able to take care of all the people who need attention, who need help. Care systems need to be changed to facilitate access to health”.

And in some ways I think this extends to other specialties as well: we have medical systems that often don’t provide coverage, and also people are often reluctant to go to the doctor. More and more patients want to have independence regarding their consultations. Well, to name just one example: the pregnancy test.

Remember they used to be made with frogs? The first pregnancy test, the oldest in existence, is believed to date back to ancient Egypt, because it was found recorded on a papyrus in the Egyptian museum in Berlin. Here they explain that to detect pregnancy the woman was made to urinate for several days on wheat and barley seeds. If after the time the barley germinated, the son would be a baron. And if the wheat germinated, it would be a woman.

Well, we’re a long way from that, aren’t we? But the first home pregnancy test dates back to 1971, 50 years ago. And it was due to a confusion of chance, of vision. A woman, Margaret Crane, a publicist who was touring a place where there was a pregnancy test, when she saw the test tube, the instruments, said “why don’t we develop it so that women can do it at home?”. And today we have a pregnancy test, which is already routine.

Patients need independence. There is one area of ​​medicine where we don’t want to have to wait months, maybe hours.

First months for them to give us the consultation and hours in the doctor’s office to make consultations that, perhaps, are a little banal, or are quick. Or they are just preliminary, not a treatment. They are to locate us within which problem we may end up having.

Human beings who are crossed by cultures, by ways of life. That we have family circumstances, social circumstances. And medicine must also attend to this aspect.

So, well, there really aren’t any advances that don’t respond to both biology and culture. And the most successful are precisely those who respond to these two aspects.”