The biomes of the world are communities of plants and animals characteristic of a climate. The key ingredient in recognizing a particular biome is vegetation.

The biome is a widespread expression of ecosystems, that is, a biome can cover several ecosystems.

The 8 main terrestrial biomes of the world are: tundra, taiga, temperate forest, Mediterranean scrub, pastures, savannah, jungle and desert. Here are its features. 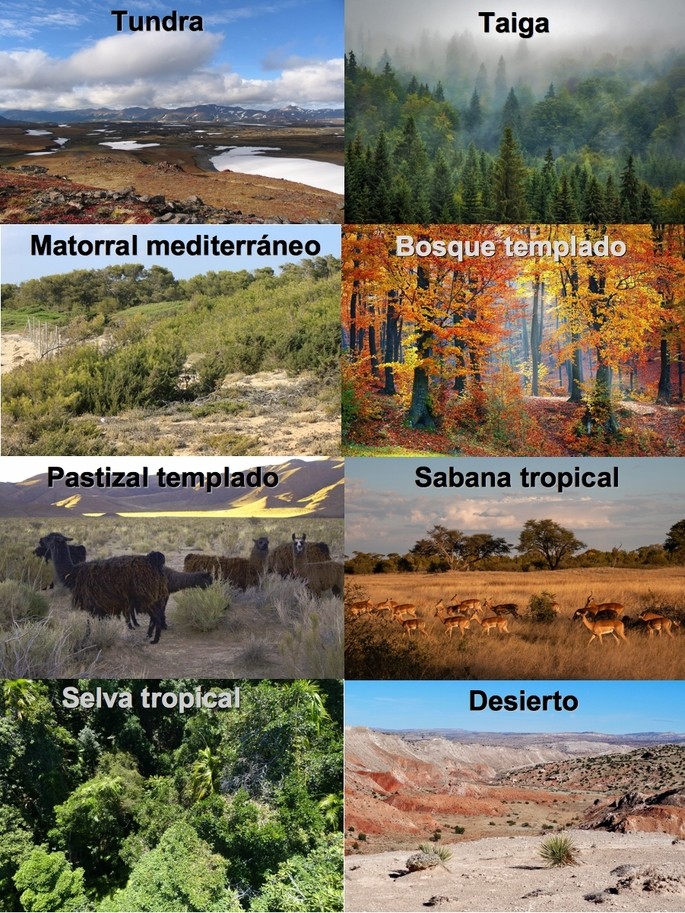 It is the terrestrial biome with the simplest vegetation and least animal diversity. It is found only in the northern hemisphere, in the Arctic region.

The tundra has no trees and the ground is covered with moss and lichen. The dominant plants are creeping vascular, dwarf shrubs and rushes.

Among mammals we find the caribou or reindeer and the musk ox, the predators are the brown bear, the wolf and the arctic fox. Herbivorous mammals are the arctic hare and lemurs.

The climate of the tundra biome corresponds to the polar climates; temperatures above 0 ºC last 6 to 10 weeks a year, while the soil remains under permafrost much of the year.

Examples of tundra is in Norway and Finland.

It is an evergreen forest in the northern hemisphere of needle-shaped leaves, dominated by conifers. It covers regions of cold continental and subarctic climates of the Eurasian and American continents.

The boreal forest consists mainly of firs, pines and larch trees, which are characterized by pointed leaves. The little sunlight that reaches the floor of the forest allows for just a few herbs and shrubs, except at the edges of the forest.

The mammals characteristic of the boreal forest belong to the weasel family such as the ermine, the mink and the marten. The lynx and the beaver are also obtained.

The elk is the largest herbivore associated with the taiga. Other mammals that live in the boreal forest of western North America are the wild sheep, the mountain goat, and the deer.

It is the terrestrial biome of temperate continental climates, dominated by thin, broad-leaved trees that fall in winter. During this time, the trees enter a period of inactivity that protects them from wind and low temperatures.

The beginning of spring is with bare trees, which allows the solar radiation to reach the ground, favoring the growth of a layer of grasses and shrubs. The characteristic trees of the temperate forest are the oak and the maple. Fruit-bearing plants are common.

The fauna is quite rich, characterized by squirrels, deer, raccoons and black bears. Some animals hibernate during the winter, such as bears, while others occasionally wake up to eat, such as squirrels.

Birds can be omnivorous or feed only on seeds. They are present all year round, like woodpeckers, which can feed on insects present under the bark of trees during the winter.

Examples of temperate forests are found in Puerto Montt, Chile, Iowa, and Luxembourg.

The biome of Mediterranean forests and scrub is present in areas of hot dry climate in summer and humid and cold in winter, as is the case in the Mediterranean region. This biome is limited to 30 to 40 degrees latitude in both hemispheres. They are also called chaparral.

It is characterized by shrubby vegetation, with reduced leaves and a waxy cover, such as rosemary, bay leaf, sage and thyme.

The animals associated with this biome are few, such as birds and reptiles.

Examples of the Mediterranean biome can be found in Greece and San Diego California.

This biome is associated with semi-arid continental climates at mid-latitudes. Pastures and perennials are the predominant vegetation, as they are adapted to seasonal temperatures and the amount of annual rainfall.

The fauna of the pastures is of little diversity. Bison, antelope, prairie dog, and groundhog are common in North America. Carnivores include coyote, badger and ferret.

Pastures are known as steppes in Russia and Ukraine, grasslands in North America, and pampas in South America.

The tropical savannah develops in tropical climates with distinguishable dry and humid seasons. The total annual rainfall is between 760 and 1270 mm of rain, where five months each year receives less than 125 liters per square meter.

The vegetation is characterized by a layer of pasture, on which are scattered trees and shrubs leaving open spaces.

The African savannah has the largest variety of hoofed animals, such as antelopes, gazelles, buffaloes, zebras, rhinos, wild boars and elephants. In general, these animals live in collective groups, so as to protect themselves from predators such as hyenas, jackals and cats.

Examples of tropical savannah are found in Nigeria, Kenya and Brazil.

It is the most complex and diverse terrestrial biome on the planet. It is located in the equatorial zone between 10 degrees north and 10 degrees south, where the ideal climatic conditions for the growth of vegetation are presented. Throughout the year, temperatures are warm and humidity is constant.

The vegetation is presented in three layers: the tops of the emerging trees, the layer at the top of the tree roof and the layer below the roof. The evergreen trees with broad leaves are typical of this biome. Below the roof of the trees, shrubs and small trees have a retarded growth due to the low light reaching the jungle floor.

Some plants grow on trees, from where they can capture light and water, such as ferns, orchids, and bromeliads. Vines and climbing plants are also obtained, as well as parasitic plants that feed on the roots of trees.

Animal life is very diverse and rich, adapted to living in trees. As the vegetation persists throughout the year, food availability is secure. Characteristic animals have bright colors, such as butterflies, birds, and frogs; they can also be very noisy, such as monkeys and gorillas.

Examples of rainforest are found in Brazil, Colombia, and Papua New Guinea.

The desert biome is characterized by a flora and fauna adapted to living in arid conditions. Rainfall amounts to less than 250 liters per square meter all year round. There are cold deserts and warm deserts, depending on geographic location and temperatures.

Shrubs and bushes are the predominant vegetation, with small leaves, often with thorns or thorns. The root system is shallow and extended to ensure that the little rain that falls can be absorbed quickly. This type of vegetation is known as xerophyte. Other plants, known as succulents, store water inside, such as cacti.

The most common desert animals are reptiles, such as lizards and snakes, and birds that can fly out of the water.

Examples of cold desert we find in Turkestan (Kazakhstan) and warm desert in Arizona and Namibia.

Rivers are aquatic biomes closely tied to the ground, where living things are adapted to the constant movement of water. Rivers are found in all regions of the planet and are characterized by constant remodeling.

Trees such as willows and poplars thrive on the shores. Organisms such as algae and cyanobacteria live in streams. Bacteria are the food of protozoa and small invertebrates, and these, in turn, feed on fish and larger invertebrates.

Examples of rivers are found in the Amazon, Orinoco and Usumacinta rivers.

Wetlands are freshwater biomes characterized by soils saturated or flooded by water most of the year. They can be formed by rain or by the high level of the underground layer of water.

Depending on the type of vegetation prevalent, three types of wetlands are distinguished: swamps, swamps and wetlands.

In wetlands, living things need to adapt to low oxygen levels. For example, some plants have structures, such as pneumatophores, that direct oxygen to the roots.

Insects, such as mosquitoes and dragonflies, commonly live in wetlands. Amphibians are also characteristic of this biome, such as toads, frogs, and salamanders, as well as some reptiles such as crocodiles and turtles.

Examples of wetlands are the Centla Swamps in Mexico and the Great Swamp in Colombia.

It is the saltwater biome composed of the expanse of continental land that is permanently submerged. It is included from the lowest part of the tide until the depth of the sea reaches 200 meters. This area is very rich and productive, so it has a very important economic interest.

In this biome are coral reefs, forests and seaweed meadows.

It is the saltwater biome that occupies 65% of the earth’s surface and is less explored. They include maritime areas deeper than 200 meters, and can reach more than 11,000 meters at the bottom of the Mariana Strait, in the Pacific Ocean.

The ocean floor is cold, dark and high pressure, extreme conditions that few organisms can withstand.

The best known predators of the open sea are sharks, mantarais, tuna and swordfish, which feed on small invertebrates and fish.

Goldstein, MY, DellaSala, DA (2020) Encyclopedia of the World’s Biomes. Elsevier