Early and strict control of type 2 diabetes, the most prevalent, could generate savings of up to 185 million euros during the first five years after diagnosis. On World Diabetes Day, we analyze the management of this disease that affects almost 6 million people in Spain and represents a healthcare expenditure of 5,809 million euros. 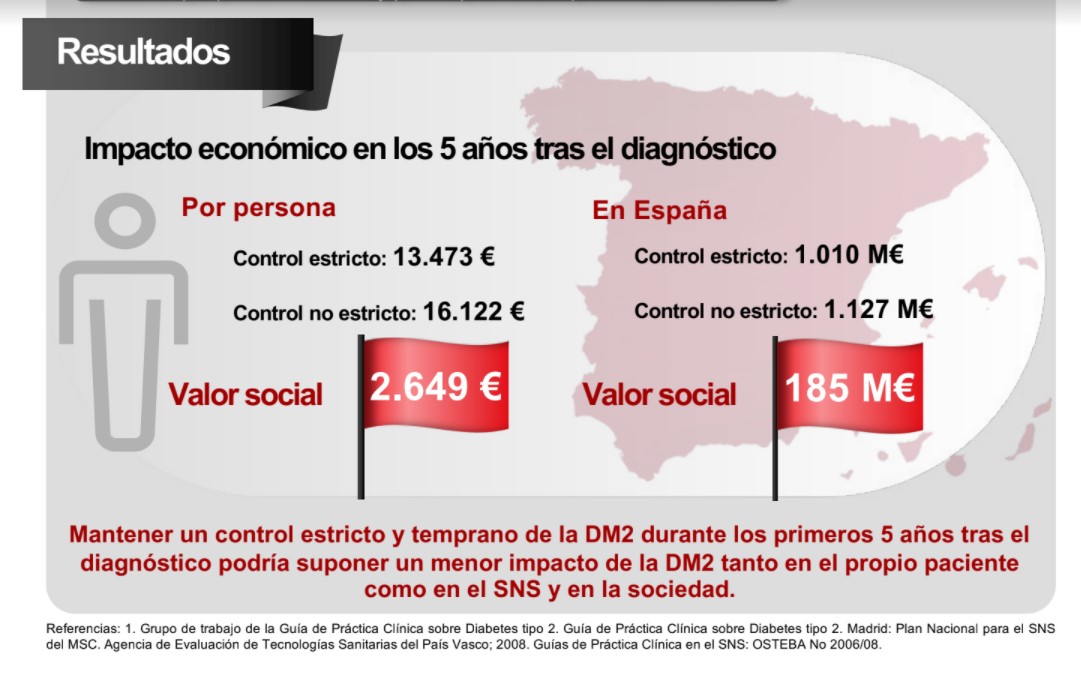 Infographic of the report “Social value of strict and early control of type 2 diabetes in Spain”. Weber/Lilly

This saving of 185 million euros in type 2 diabetes is broken down between hospitalizations (65.7 million); improved quality of life (56.2 million); labor productivity due to reduction in mortality (41 million) and savings due to the reduction of complications (22.2 million).

Data listed in report “Social value of strict and early control of type 2 diabetes in Spain” carried out by the consulting firm Weber for the pharmaceutical company Lilly and whose objective was to estimate, precisely, this social value, that is to say, the difference between the economic impact generated by strict disease control versus non-strict control five years after diagnosis.

According to FEDE figures, people with diabetes in Spain have increased by 42% since 2019, adding up to almost 6 million cases and could reach 9 million in 2025.

The health expenditure which assumes that it is 5,809 million euros per year, a cost that increases as the number of affected increases.

These data, according to FEDE, place Spain as the second country in Europe with the most people with diabetes, only behind Germany.

The number of people affected by type 2 diabetes, the most prevalent, increases every day by 1,100 cases in Spain, according to FEDE, since they do not receive adequate diabetes training to control the disease.

The report “Social value of strict and early control of type 2 diabetes in Spain” shows that a person without this pathology consumes 1,804 euros every year in direct health resources against the 3,110 euros on average for a person with type 2 diabetes.

And a strict and early control of the disease would generate a saving in diabetes of up to 185 million euros of savings against those mentioned.

Regarding the specific economic impact per patientthe report points out that strict control of type 2 diabetes would generate a positive social value during the first five years after diagnosis of 2,649 euros per person, broken down into 318 euros for reducing the impact of complications940 euros for decrease of hospitalizations805 euros thanks to an improvement of the life qualityand 586 euros a labor productivity by reducing mortality.

The cost of diabetes complications

The high cost of drugs is joined by the complications generated by type 2 diabetes which can be acute and/or chronic:

Reducing hospitalizations for acute and chronic complications represents the positive economic impact with the highest absolute social value: €65.7 million, which would represent an 18.9% reduction in the total cost generated by complications if diabetes is maintained controlled

How to keep diabetes at bay?

In addition to the importance of early diagnosis, it is important to follow regular guidelines for disease control.

Also the therapeutic adherence is essential: taking the correct dose, respecting the intervals between doses and persisting over time is very important to achieve glycemic control and improve clinical outcomes.

And all of this entails an education of the patient and the healthcare professionals.

World Diabetes Day 2022 is celebrated under the theme “Educate to protect the future” since two of the main challenges are the access to care and the therapeutic education in diabetesas emphasized by the Spanish Diabetes Society (SED) and its foundation (FSED) and the Spanish Diabetes Federation (FEDE).

They consider that therapeutic education in diabetes has gone from being a necessity to becoming a priority and an urgency.

In addition, they ask the health authorities to create one professional profile for diabetes education and dedicating enough time to it, a task that nurses now carry out, many have already reached retirement age or are close to it “and the provision made to fill their position leaves much to be desired”, they say.

Also the constant incorporation of technological resources for diabetes, in many cases, they are not accompanied by the means and adequate training to implement them.