Improving prevention, access to early diagnosis and innovative treatments to affect new cases and deaths caused by lung cancer are the main challenges facing Mexico around this tumor, one of the leading causes of death older for cancer. 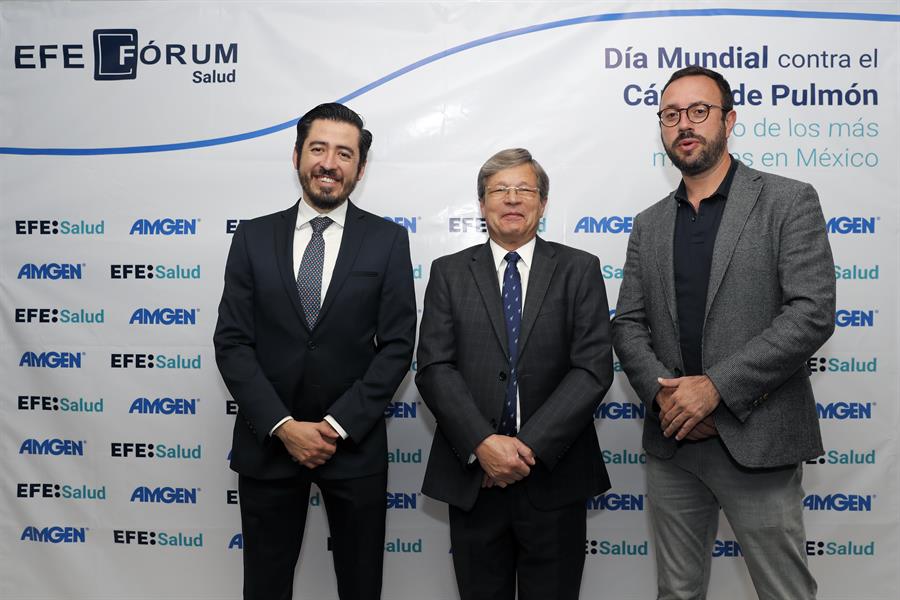 The oncologists Luis Antonio Cabrera (i) and Jorge Alatorre (d) and the medical director at Amgen, Max Sarachaga (c), speakers at the forum “World Day against lung cancer… one of the deadliest in Mexico” held in the City from Mexico EFE/Alex Cruz

These were the main conclusions of the EFEForum “World Day against lung cancer… one of the deadliest in Mexico”held this Thursday in Mexico City.

“Lung cancer is very important (…) it is the sixth cause of death in the world, it is a health problem”, he said at the event oncologist Jorge Alatorre.

The expert mentioned that according to the World Health Organization (WHO), lung cancer is the third most common and the first cause of death related to cancer.

In Mexico, the picture is no different, since in 2020 alone 7,811 new cases and 6,733 deaths from this neoplasm were registered.

The key is early diagnosis

Alatorre explained that one of the main problems with this disease is the lack of timely or early diagnosis, since most cases are detected in advanced stages.

“What the pure numbers tell us is that there is advanced lung cancer when there are already symptoms,” lamented the specialist.

In this sense, the oncologist Luis Cabrera he stated that in the country “there is no education” to detect this suffering in a timely manner or “the dissemination that there are methods to detect tumors in time”.

He explained that, unlike other countries, in Mexico less than 1% of cancers of this type are diagnosed in the early stages, while in the United States and Great Britain this figure exceeds 20%.

“This makes a difference in offering curative treatment”, he pointed out.

He pointed out that one of the barriers is the Mexican health system, which, being so fragmented, does not allow homogeneity in detection and treatment times.

“That all health systems are treated equally, this would help a lot to improve the prognosis of patients”, said Cabrera.

Màx Saràchaga, medical director of Amgenhe recalled that lung cancer is one of the few neoplasms that, so far, have revolutionized treatments, thanks to the fact that some mutations have been found that allow more personalized therapies to be designed.

“Today lung cancer requires knowing precisely which mutations it has because this will depend on the management and what can be offered to the patient”, he pointed out.

The specialists explained that, in addition, there are much more effective treatments, such as immunotherapy, and which have fewer adverse effects than those caused by chemotherapy, which until a few years ago was the only treatment offered to patients.

Added to this, the most current treatments offer longer survival to patients, since while previously 3% of patients were alive 5 years after diagnosis, this figure currently rises to just over 60%.

Despite this, the specialists have agreed that the biggest barrier remains patients’ access to treatment, especially for those in the areas furthest from the country’s cities and for those who do not have some type of social security.

Faced with this, they urged work to ensure that public institutions offer patients “the last name of the tumor”, a concept that refers to the biological information of tumors.

“This is something that we have to develop in Mexico, we often have well-equipped hospitals with well-qualified doctors, but you cannot have the last name of the tumor”, highlighted Sarachaga.

Finally, they pointed out the importance of prevention and removing stigmas, especially in patients who smoke, since 98% of lung cancer cases are related to smoking.