Renewable energies are all sources of natural resources that can be recovered after being used by humans to cover their needs. They are alternatives to the burning of non-renewable fossil fuels that are limited and polluting.

Renewable energies are unlimited in nature or can be regenerated in a relatively short time. For example, when we use the Sun we are not using it up or destroying it, we are simply making use of the light radiation or heat.

Renewable energies are sustainable, that is to say, we can use them without affecting their production and employment in the future. This ensures that the next generations will be able to supply themselves with these sources of energy to live there.

There are different types of renewable energy depending on the resource from which it is obtained. Let’s see the most important examples.

Hydroelectric energy is electricity generated by the force of water. This is the most widely used renewable energy globally, with 60% by 2019.

The way to transform water energy into electrical energy is through hydroelectric plants. These are installations of great economic investment due to the type of constructions that must be done to ensure their operation. The first hydroelectric plant was built in 1882 on the Fox River, in Wisconsin (USA).

Although water is considered a renewable natural resource, the energy that can be obtained from a hydroelectric plant can be limited due to, among other things, the deposit of materials in dams and droughts in the region.

On the other hand, the construction of hydroelectric plants alters the ecological structure of the area, including the displacement of native species and human populations. This is what happened in the construction of the “Three Gorges” dam on the Yangtze River in China, where more than a million people moved.

From water we can obtain another type of energy in addition to electrical energy. Hydraulic power refers to using water to produce the movement of a machine.

This is one of the oldest renewable energies. It involves using moving water to turn a wheel that is connected to other devices.

For example, hydraulic energy was used to grind grain; in this case, the water turned some rocks that, when moved, crushed the grains to produce flour.

The Sun is a renewable energy source par excellence. When we use the Sun’s rays to heat something, we are using solar thermal energy. Its heat can be used to heat spaces, such as in greenhouses, cook food using solar ovens and heat water.

An example of how we obtain thermal solar energy is through solar collectors. These are devices that have a water tank that circulates through tubes that concentrate the heat. They are generally installed on the roofs or terraces of buildings.

The source of photovoltaic energy is the Sun, which is free and present everywhere in the world. In order to obtain electricity from the Sun, systems are needed that transform light energy into electrical energy.

Photovoltaic systems are built by a material that, when receiving light, electrons move and an electric current is produced. Silicon is the material most used for this purpose and is found abundantly on Earth.

The main disadvantage of relying on photovoltaic energy is that the Sun is not available at night and when the sky is cloudy. In this case it is necessary to resort to another source of energy or to store the energy in batteries.

The technological advances related to the solar industry have led to the reduction in the cost of the equipment, which makes the transfer to the use of solar energy as an alternative to fossil fuels more attractive.

You may be interested to see the advantages and disadvantages of solar energy.

Wind energy is a clean alternative energy because it does not generate waste or polluting gases like fossil fuels. The wind is an inexhaustible source of energy, when it is used in the generation of energy it is not spent. However, it is not available 24 hours a day, 365 days a year.

Wind turbines generate electricity by capturing the energy in the wind. Thus, the higher the turbine is, the stronger the wind and the more energy production. These structures are generally located in fields, but they can also be installed offshore.

Wind energy is the fastest growing renewable energy in recent years. By 2019, countries such as Uruguay, Portugal, Ireland, Denmark and Lithuania obtained more than 25% of their electricity from wind.

Biomass energy refers to energy obtained from biological compounds, mainly wood, farm animal manure, agricultural waste, among others. Biomass is a renewable form of energy that is derived from the photosynthesis process of plants.

Wood has been used since ancient times to cook, light and give warmth to the human being. Today it is mainly used to build buildings and furniture.

Some crops or their waste, such as corn, are used to produce ethanol, which is used to replace gasoline in vehicles.

Energy can be extracted from the collection of municipal waste; it is what is called “transforming garbage into energy”. Biological matter in municipal waste can be broken down to generate methane, which is then used as fuel gas. 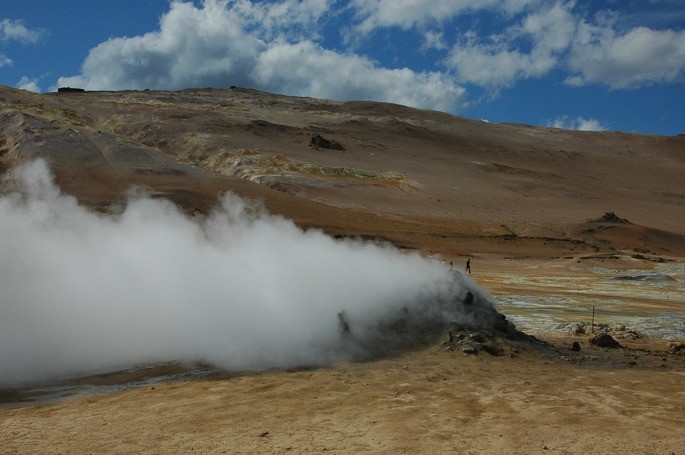 Geothermal energy is energy coming from the Earth. Heat accumulates inside the Earth that can be used to produce electricity.

However, not everyone has access to this type of energy. Just 0.3% of the world’s electrical power comes from the geothermal source.

8. Energy of the oceans

Energy can also be extracted from the oceans. These cover 70% of the Earth, which means that it is an unlimited source of energy, since the generation of energy does not consume the material of the ocean.

Energy can be extracted from the ocean through waves or tidal movement. The technologies for this are still in the experimental phase, but they promise enormous potential as an alternative to non-renewable energies.

Where does the energy of all the stars in the Universe come from? From hydrogen! Hydrogen is the most abundant element in the universe, found as part of water, biological molecules and hydrocarbons.

Electricity can be produced from a hydrogen fuel cell. In the battery, the hydrogen loses its electron which passes into the electric current. On the other hand, the cell enters oxygen from the air, which reacts with the hydrogen, producing water. In this way electricity, water and heat are produced.

The major drawback of hydrogen fuel cells is their high cost.