Therapeutic harmonization and speed and unification of criteria in neonatal screening are key so that patients with spinal muscular atrophy (SMA), a rare neurodegenerative disease of genetic origin, can access treatments that help them have a better quality of life, as stated by different experts in Barcelona. 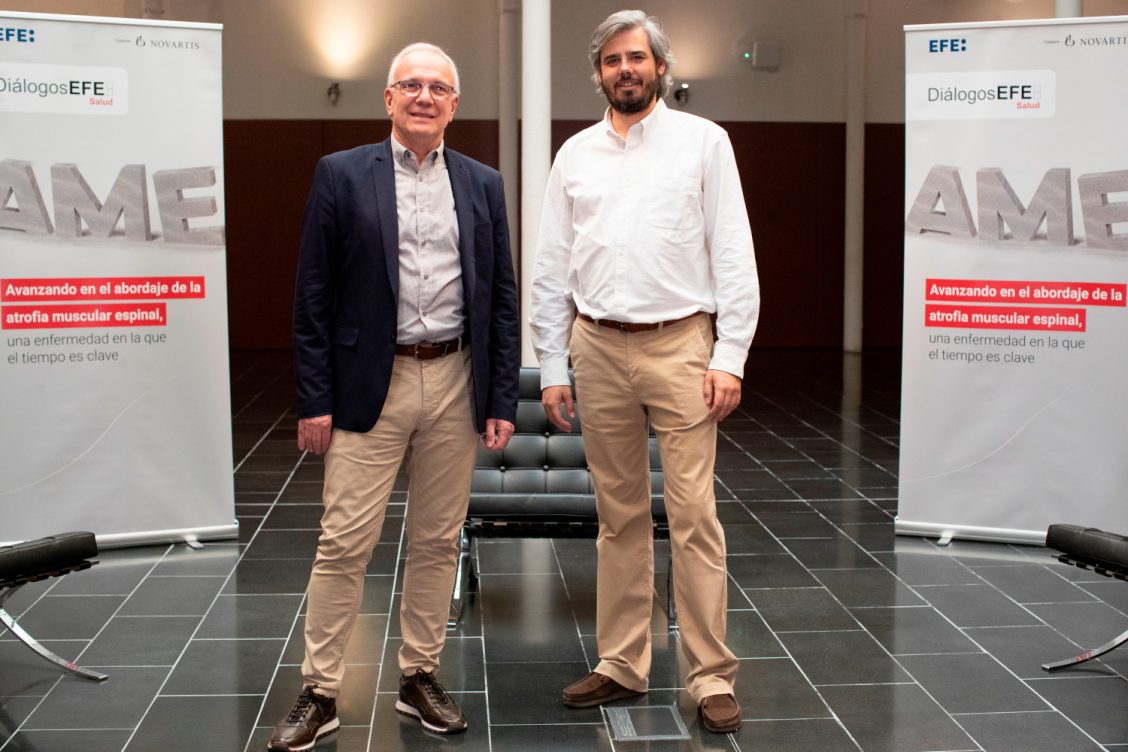 Dr. Eduardo Tizzano, director of the Clinical and Molecular Genetics Area of ​​the Vall d’Hebron (esq) and the patron of the Fundació Atrofia Muscular España (FundAME), Rodrigo Gómez. EFE/Marta Pérez

In a new edition of Diàlegs EFEsalut, organized by the EFE Agency in collaboration with Novartis, under the title “Advancement in the approach to spinal muscular atrophy, a disease where time is key”, participated the doctor Eduardo Tizzano, director of the Clinical and Molecular Genetics Area of ​​the Hebron Valley; the head of the Metabolopathies Laboratory at the University Hospital of Málaga and the Neonatal Screening Center of Eastern Andalusia-IBIMA, Raquel Yahyaoui; and the patron of the Spanish Muscular Atrophy Foundation (FundAME), Rodrigo Gómez, parent of a child with this disease.

“We can’t talk about a cure because the degeneration of the neurons begins in the fetal stage,” Dr. Tizzano began by warning, to clarify that what the treatments can do is stop this process and achieve a better quality of life for those affected.

People living with spinal muscular atrophy lack the SMN1 (survival motor neuron) gene, which causes the motor neurons – responsible for movement located in the spinal cord – to deteriorate and die, losing muscle at the same time.

This has a significant impact on daily life as it makes it difficult to stand, walk or even hold your head, but it also prevents functions such as swallowing or breathing normally. There are cases in which the newborn does not survive more than two years.

Dr. Tizzano, from the Vall d’Hebron hospital, has remarked that, given the characteristics of the pathology, the most serious form is the one that appears at an earlier age.

This is why the importance of neonatal screening, which clinical biochemist Raquel Yahyaoui has considered essential to achieve an early diagnosis that facilitates therapeutic efficiency, which “makes the difference between achieving a normal life or having irreversible sequelae”.

However, given the disparity of screening programs in Spain – depending on the autonomous community certain screenings are carried out or others -, he has claimed that, as a deadline, there must be a homogenization of these programs in 2025.

As he explained during the debate, the situation in Spain is “very positive” with the progress in this field, but “harmonization and expansion of the number of diseases that are reported is lacking”.

In this sense, Rodrigo Gómez, father of a 4-year-old patient with AME, has called on the authorities to increase social assistance and favor access to therapies such as gene therapy, which through the inoculation of the gene that lack directly addresses the genetic cause of the disease.

This treatment is restricted to children under 9 months and, according to Gómez, this is limiting and affecting many people.

Currently, there are three treatments approved by the European Medicines Agency (EMA) that clinically improve the condition of people living with this disease, whose prevalence is 1 in 10,000 inhabitants.

This edition of Diàlegs EFEsalut has been held in the framework of the III International Scientific Congress on Spinal Muscular Atrophy in Barcelona, ​​coordinated by SMA Europe, with FundAME as the host entity, and more than 800 researchers and specialists attend, where they will a workspace to find solutions to the challenge presented by the disease.