Spain has been placed among the ten countries that publish the most on oncology research and Spanish researchers sign three percent of the works that are published worldwide. Philanthropic funding has been key. 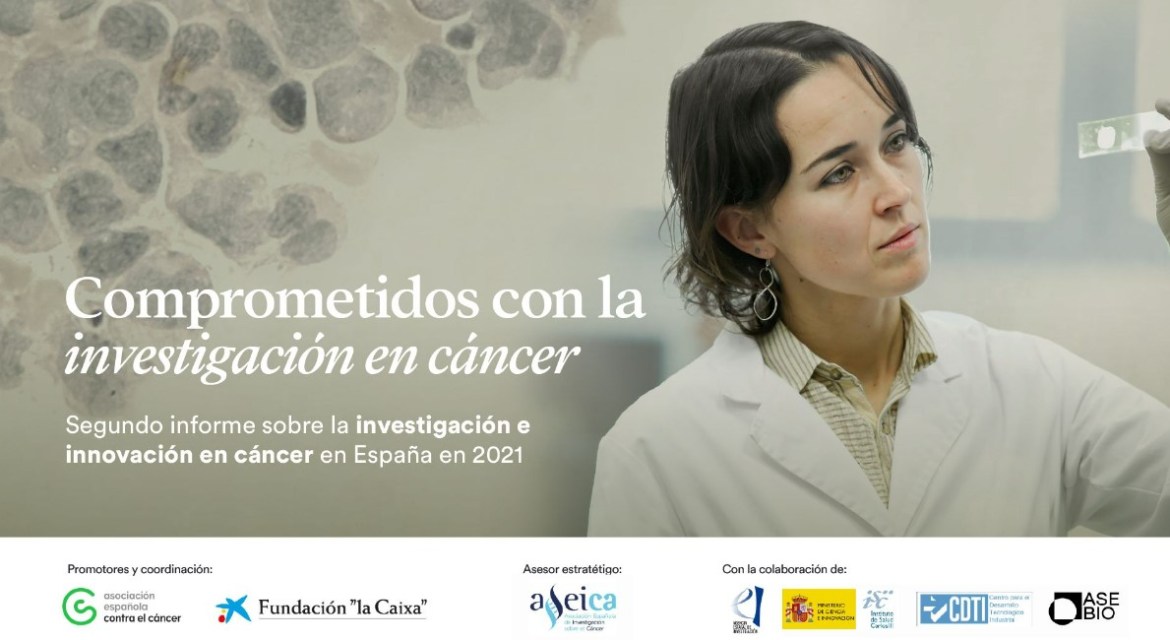 Cover of the report on oncology research by the AECC and the La Caixa Foundation.

A quality and strength of oncology research that is not always aligned with clinical needs.

Private clinical trials prevail; in those cancers with lower survival rates (lung, pancreas, liver, stomach and oesophagus), the impetus for research aimed at translating results into clinical practice is far below the needs of patients; and the main challenge in oncology is to speed up access to new treatments.

These are some of the conclusions highlighted by the second “Commitments to cancer” report who have elaborated the La Caixa Foundation and the Spanish Association Against Cancer and which x-rays the state of research and innovation in this field in Spain during the period 2016-2020.

Cancer is one of the main causes of death and in 2020 it was responsible for almost 10 million deaths in the world – one in six – and research is essential to prevent the disease, to detect it early and to deal with it in an appropriate way, stressed the managers of the ”la Caixa” Foundation and the AECC during the presentation of the report to the media.

Although general spending on research and development has recovered to 2010 levels, the 1.41 percent of GDP – in 2020 – that Spain dedicates to research is far from the 2 percent that the State Research Plan Scientific and Technical and Innovation 2017-2020 established for 2020.

Public funding for business R&D projects is concentrated in the most prevalent cancers, in which technological development in diagnosis and treatment is more advanced, such as colorectal and prostate, and public funding in basic research is focused on tumors of the central nervous system and leukemia, both with a lower prevalence among the population.

The level of the research groups

The report notes the high quality of the oncology research groups in Spain, which is reflected in the scientific publications, but also that the Spanish system seems to have finished the expansion phase compared to other countries such as China or India, which are in full growth of scientific production.

And just as it happens in the rest of the world, research in Spain has a greater dedication to colon, lung, breast, melanoma, and non-solid cancers (lymphoma or melanoma); and yet in those types with lower survivals the impetus of clinical research is below the needs of the patients.

The director general of the Scientific Foundation of the Spanish Association Against Cancer, Isabel Orbehas underlined the efforts made by this organization to try to correct inequalities in access to research results and bring them directly to the patient.

Orbe has emphasized the need to invest in tumors with low survival and in rare cancers, to improve the working environment of researchers and to enhance their presence in international projects.

For his part, the director of the Area of ​​Relations with Research and Health Institutions of the La Caixa Foundation, Ignasi Lópezhas asserted that research is the best way to reduce the impact of cancer and to move towards more advanced treatments and techniques, and in this sense he has underlined the support of this entity to some of the leading scientific institutions, such as Vall d’Hebron Institute of Oncology or National Center for Oncological Research.

The report also reflects that the Spanish system is “aging” and in which it is difficult to consolidate research talent, which endangers long-term sustainability, and also points out that no significant improvement is perceived even in leadership female or the entry of young people who lead oncological research projects, and that most of the funding is captured by the senior categories.