In both cases there is a “disappearance” of one of the stars by the shadow of another when they are aligned.

The lunar eclipse is the phenomenon that occurs when the Earth passes between the Sun and the Moon, preventing the light of the Sun from being reflected on the satellite.

This can only happen when the Moon is in its full moon phase. That is, when we see the moon fully lit up, it suddenly begins to darken.

However, lunar eclipses do not occur in all lunar cycles, as the orbit that describes the Moon around the Earth has a slight tilt.

Depending on the part of the Earth’s shadow that falls on the Moon, we can distinguish:

The next total lunar eclipses will occur on the following dates:

You may also be interested in see Phases of the Moon.

The solar eclipse is the phenomenon that occurs when the Sun hides during the day because the moon crosses between it and the Earth. This causes the shadow of the moon to be projected onto a part of the Earth, causing people in this region to stop seeing the illuminated Sun.

They occur when the Moon is in the new moon phase. At least two solar eclipses occur each year

To be able to observe a solar eclipse you need to use special lenses or binoculars. Never look directly at the Sun! Doing so can damage your vision.

Four types of solar eclipse can be distinguished: 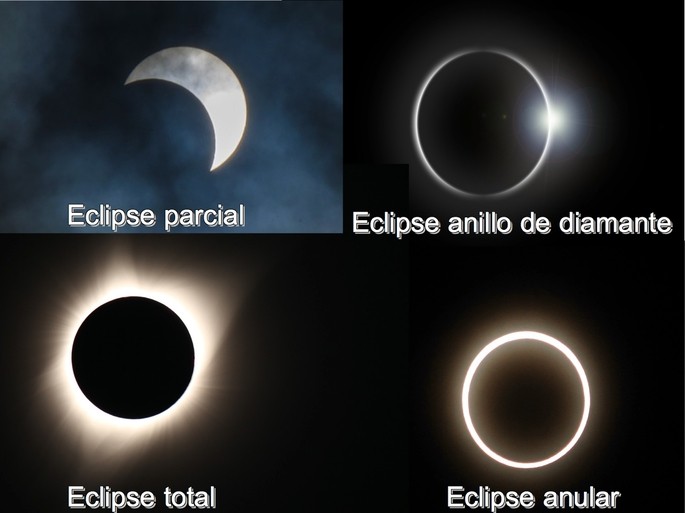 The next solar eclipses will be: