Nancy Stokes, played by the wonderful Emma Thompson, is a retired widow who hires the sexual services of Leo Grande. She has only had sex with her husband and after going through her fantasies a thousand times, she finally decides to take the step of having a new experience. Just like the story, Good luck, Leo Grande it is a simple film, without great ostentation, sustained by the two actors who eat up the screen thanks to the good chemistry they exude. They talk, strip and go crazy.

The protagonist’s encounters with the young gigolo are pure magic. She who has lived and instilled sexual repression, now realizes that she needs to vent. But unlike the men who come into the room unload and leave, Nancy needs to go slow and let go of the burden she carries inside, Leo Grande is a superman, beautiful eyes, a perfect face, a body without a single gram of fat and abs that bring out the hiccups. He is a professional who knows how to take his client where she wants.

Sophie Hyde it doesn’t need much. A room, two actors and good dialogues are enough to explain a film. Divided into four parts, the director will unmask the protagonists. Leo Grande sells fantasy, an idealized relationship, and Nancy needs something more. You need to meet and connect with the gigolo. It may seem that this simplicity is a little poor in terms of staging, but the director shows that she does not have to show off in order to create good moments. In its simplicity there is virtue. 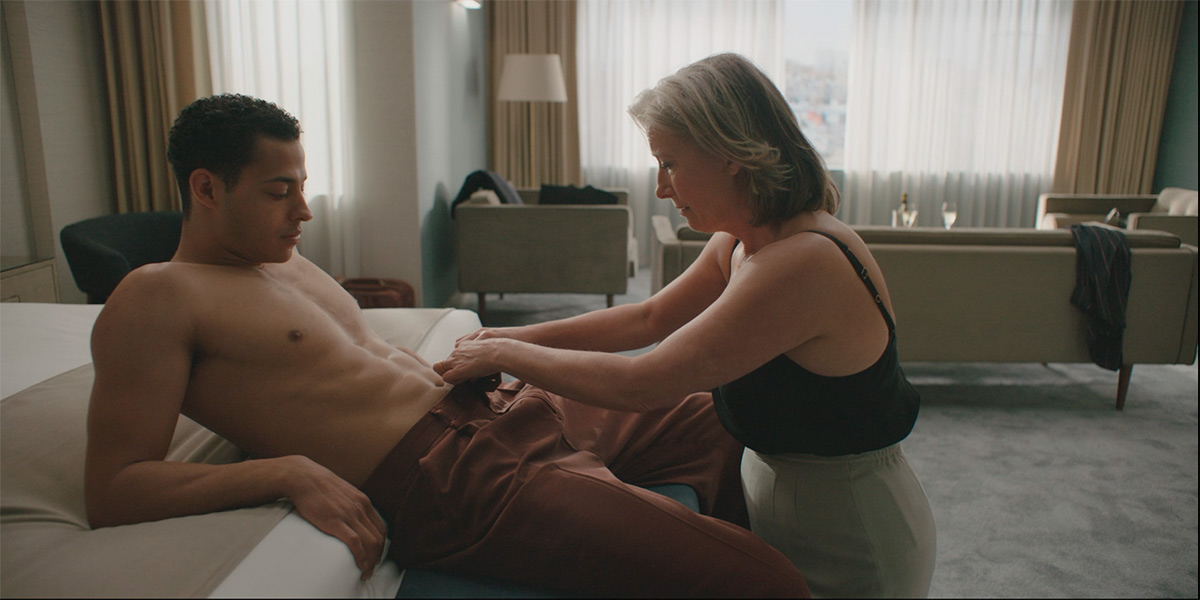 The film’s perception of prostitution is interesting and very topical. The Spanish government has been wanting to make a law to abolish prostitution for some time and the film comes as a ring on the finger to learn about the business. It is not obvious that there are sex slaves, but in Leo’s case it is merely professional. A free man who has decided on this job and what’s more, he likes it. It’s a business you enjoy knowing what the limits are. A contracted time to fulfill the client’s wishes. The line between fantasy and reality is very thin and for Nancy perhaps non-existent. When her time as Cinderella ends, the fantasy finally breaks and she returns to reality.

The role of Emma Thompson it’s candy The actress takes advantage of this and brings out all the juice in a character with many fears, shames and insecurities. Many women her age when they see the film will feel represented. A generation that has experienced repressed sexualization and that don’t even know the pleasure of an orgasm. His character is the one with the most nuances, unlike Leo who is a character with less history and Daryl McCormack shine less Emma Thompson brave, goes one step further and is not afraid to strip. What does it matter if her body has aged or if her stomach is flabby or if her breasts have fallen… in short, she is a woman of about 60 years old and knowing her body to enjoy it.

The naturalness with which sex is discussed and shown is a wonder. There are no funnels to have a conversation about oral sex or capture on screen the lust between the two of them. It gets the viewer’s prejudices broken and as Nancy we see beyond a few wrinkles. The further away from shame the closer one will be to being a freer person. Nancy, a professed religion, is the clear example. Years of being stuck in a repressed cage is worth the meetings with Leo to strip off the shame.

It may seem that Good luck, Leo Grande be a film aimed only at these women and entering menopause, but it would be a mistake of catastrophic proportions. The film can reach everyone. Surely one will look in the mirror after watching the film and find an imperfect body eager to enjoy it. Sophie Hyde it moves between comedy and light drama. It is neither a film that will bring out laughs nor does it intend to, nor will it make the viewer cry. Everything is a very light tone that at the end leaves the flavor of having enjoyed a small, but magnificent film. They are one of those films that leave a very good body.