Researchers from the Institute of Biomedical Research (IRB) in Barcelona have identified the cells responsible for the relapse of colon cancer and the reappearance of cancer in other organs after the removal of the primary tumor. 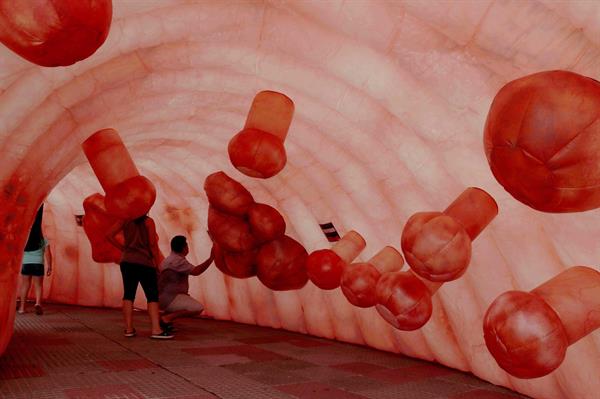 Giant-sized view of a reproduction of a human colon

The finding, published by the magazine ‘Nature’, shows that the early immunotherapyprior to surgery, it can eliminate these cells before they metastasize and thus prevent colon cancer from coming back.

According to the researchers, led by head of group at the CIBER of Cancer (CIBERONC), Eduard Batllethis work opens the way to develop new therapeutic approaches and diagnostic tools to slow the progression of the disease and improve the prognosis of colon cancer, the third most common, with nearly 2 million new cases each year in the world.

Batlle recalled that most patients are diagnosed when the tumor is still located in the colon or rectum, that they are removed through surgery and that in many cases they are treated with chemotherapy to avoid relapses, but between 20 and 35% of cases the cancer reappears in other organs in the form of metastasis.

According to Batlle, metastasis originates from residual tumor cells that remain hidden at the time of surgery, mainly in the liver or lung.

Until now, colorectal cancer research has focused on understanding the primary disease, although in recent years there have also been advances in characterizing metastatic disease once it manifests, but this small population had not yet been investigated. of tumor cells that is disseminated and that is invisible to the diagnostic techniques used in the clinic.

Now, Eduard Batlle’s team has for the first time identified residual tumor cells hidden in the liver and lung, and has characterized how they evolve until metastasis appears in these organs.

“Understanding and avoiding the phenomenon of relapses after surgery is an unmet medical need. After years of researching colon cancer, we have taken a first step to prevent metastases in patients who start with a localized disease”, explained Batlle.

To carry out their research, the scientists generated a new experimental mouse model to recreate the process followed by patients who suffer relapses, and developed a methodology that makes it possible to isolate a tiny fraction of disseminated tumor cells hidden in the body .

“Our model, very similar to the progress of the disease in patients, has allowed us to characterize the primary tumor and the dynamics of the residual disease. We studied micrometastases of 3 or 4 cells, metastases of medium size and even larger ones, characterizing how each one evolves during the progression of the disease”, explained IRB researcher Adrià Cañellas-Sòcies.

Cells with a high probability of relapse in colon cancer

In the amalgam of cell types that make up colon cancers, researchers have identified a population, which they have called HRCs – for the acronym in English (High Relapse Cells or Cells with a high probability of relapse)-.

These cells have little proliferative activity and do not contribute to the growth of the primary tumor, but are able to detach from the cancer in the colon, migrate into the bloodstream, reach the liver, and remain hidden for some time after surgery.

In samples from patients with colon cancer, researchers have noted the presence of these same cells after treatment and have confirmed that eliminating these cells with genetic techniques is sufficient to prevent the formation of metastases.

The Batlle team has also developed one therapeutic strategy to specifically eradicate residual disease and prevent recurrence through treatment with immunotherapy, prior to surgery.

“Our discovery reveals for the first time how the group of tumor cells responsible for relapses behaves, and also the genes that define them. In addition, it represents a proof of concept that opens avenues for the development of new therapies aimed specifically at eliminating residual disease and of new diagnostic tools to identify those patients with the highest risk of relapse”, summarized Batlle.

The work of the Biomedical Research Institute, in which researchers from the University of Oxford (United Kingdom), the Katholieke Universiteit de Leuven (Belgium), the National Center for Genomic Analysis (CNAG-CRG) have also collaborated ) and from the Bioengineering Institute of Catalonia suggests that in many cases it would be advisable to apply immunotherapy before surgery.

Research into colon cancer relapse has received funding from the La Caixa Foundation, the TV3 Marathon, the Spanish Association Against Cancer, Cancer Research UK, the Ministry of Science and Innovation and the European Research Council.