David Gordon Green puts an end to his crazy trilogy with Halloween: The Enda catastrophic ending that does not do justice to its underrated predecessors.

Before starting this year’s festival, it was clear that the closing of the trilogy Halloween by David Gordon Green would be the event of this Sitges edition. I had loved the first two parts and the Melià Auditorium had vibrated with both, so the third and final title was not to be left behind.

Halloween: The End locate your action four years later of the events that shake the town of Haddonfield a Halloween night i Halloween Kills. Just as it happened between 1978 and 2018, the passage of time has turned Michael Myers into an untold legend that disturbs and terrifies in equal parts. For her part, Laurie Strode, after the murder of her daughter, lives with her granddaughter and writes the memoirs. Tranquility seems to have calmed the waters of Haddonfield, but Halloween night approaches and the evil again stalks its inhabitants. 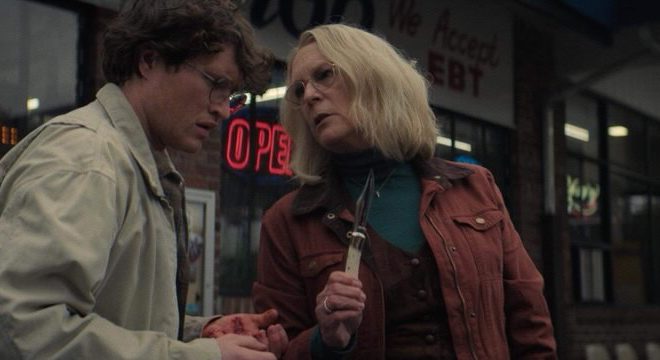 Halloween: The End it’s a frustrating movie. It makes no sense to try to soften my conclusion in order to ultimately justify its null value, therefore better start strong. The premise, by itself, makes no sense. It completely breaks with the ecosystem that had been built by the previous two installments of the saga. Set the action four years later unjustifiedBesides the weakest excuse that they use is neither interesting nor stimulating. Frustrated, and a lot.

Turn a trilogy so irreverent and wild like the one David Gordon Green has done is a master-apprenticeship lesson in style Star Wars it has to go on the Olympus of the worst decisions in the history of cinema. Is anticlimacticI repeat, it destroys the essence of the characters and loses a golden opportunity to close a trilogy that would have been more than respected within the slasher. The worst thing is that I was there was still an hour of nightmare left.

Not everything is catastrophic a Halloween: The Endeven if it doesn’t seem so judging by my words. The (little) gore it has is very accomplishedand when he wants to pass three towns, he succeeds, but it is on rare occasions, incomprehensible. The prologue is also wonderful, but it seems like a short film within an irregular, bland and failed film. And already little else can refloat this drifting ship.

INTERVIEW WITH GASPAR NOÈ FOR THE PREMIERE OF VORTEX

Little more I can say about Halloween: The End. Has been the great disappointment of the Sitges Festival of this year and an unfair ending for a trilogy that I have come to love. It’s frustrating to see a trail end in such a bland place, but hey, at least I got to enjoy one way as crazy as fun.