The Minister of Health, Carolina Darias, has announced this Saturday that she will present herself in the primaries of the Canary Islands PSOE to be a candidate for the Mayor of Las Palmas de Gran Canarias in the municipal elections of May 2023. She will remain as Minister until the start of the electoral process. 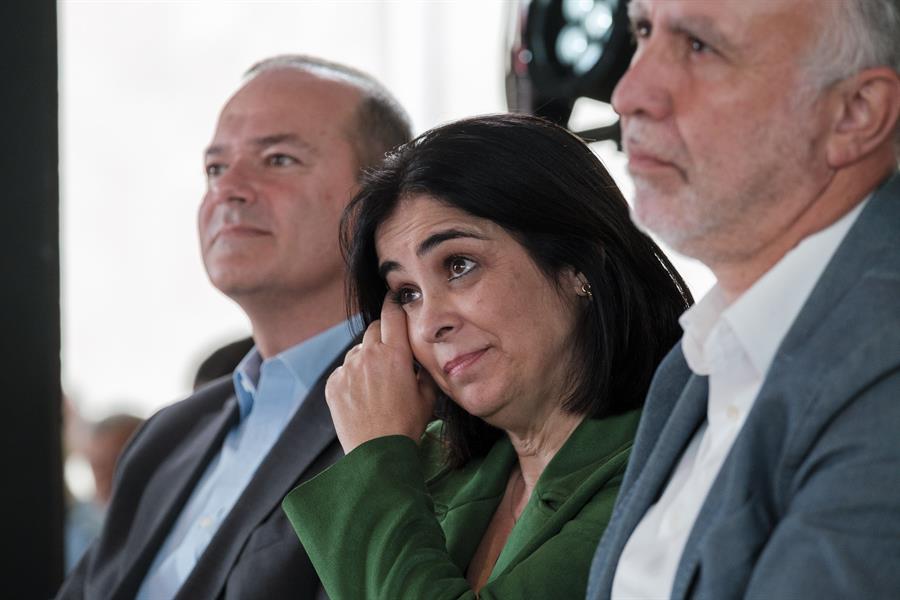 The Minister of Health, Carolina Darias, at the presentation of her candidacy in the PSOE primaries for the City Council of Las Palmas Gran Canaria, accompanied by the leader of the Canary Socialists and president of the regional executive, Ángel Víctor Torres (d ), and the current capital mayor Augusto Hidalgo (i). EFE/Ángel Medina G.

In an event held in Las Palmas de Gran Canaria and attended by the deputy general secretary of the party, María Jesús Montero, and the leader of the Canary Socialists, Ángel Víctor Torres, as well as its mayor, the socialist Augusto Hidalgo , Darias has confessed her passion for politics, a career she started in 1999 as a councilor in her hometown to which she is now returning as a candidate for Mayor.

And he is coming back because he owes “everything to this city and its people”, according to Darias, who said that she is ready “to put all her experience and knowledge at the service” of Las Palmas de Gran Canaria after the “good job of August Hidalgo and his team”, who has been at the head of the municipality for the last eight years with a coalition government, and because he is “aware of the challenges” he faces.

Darias has stated that with his candidacy for Mayor a new “beautiful project” begins in the city where he raised his family, studied and plowed his future as a public employee, which is why he claims both the value of what is public, she specified, while also showing her gratitude to President Pedro Sánchez for appointing her minister, a position in which she will remain until the end.

Return to the output drawer

It has been practically everything in the ranks of the PSOE and it has been in every possible state of the public administration. Now, Darias, returns to the exit drawer of her political life, the City Council of Las Palmas de Gran Canaria, where she held her first public position as a councilor in 1999, and the Mayoralty to which she aspires.

Since then, she has been deputy and president of the Parliament of the Canary Islands, delegate of the Spanish Government, regional councilor of the Economy, Minister of Territorial Policy and, later and until now, the highest responsible for Health.

It has given Darias time to even try to lead the PSOE candidacy for the Presidency of the Canary Islands Government in the 2015 elections, but he ended up losing those primaries.

Of the current Minister of Health, his colleagues in the islands emphasize his ability to work and his “absolute” dedication to the party. “She’s a high official for good things and for bad”, they say because of her affiliation with regulations, laws and, in general, “things done well”.

There are also those who describe her as a person who is always open to dialogue but who can become “hard to chew” in complex negotiations, such as those she had to carry out at the dialogue table with Catalonia during her time as Minister of Territorial Policy.

The minister who took the witness stand to manage the pandemic

Carolina Darias took the reins of the Ministry of Health on January 27, 2021, with the first month having just completed the vaccination campaign against covid-19 that had been outlined by her predecessor, Salvador Illa, before returning to Catalonia.

Currently, it leaves more than 90 percent of Spaniards with the complete guideline and the fourth round of the campaign – that of the second doses of memory – well advanced; but along the way there have been no shortage of mines, such as those that erupted with the changes in criteria with the AstraZeneca vaccine or the low vaccination coverage in young people and children, not to mention the ups and downs with masks and restrictions.

A path in which other unusual “bugs” have also crossed his path, such as monkey pox, childhood hepatitis of unknown origin or the first indigenous cases of bird flu, which have overshadowed the other major commitments expected since years ago in the drawers of the Ministry to be fulfilled.

The most awaited, that of tightening the tobacco law, which it already seems will not be possible in this legislature, or reforming the alcohol law for minors.

Yes, he has seen the acclaimed euthanasia law move forward in Parliament, the great project of his colleague and predecessor in office María Luisa Carcedo and has laid the groundwork for others who still have to face this procedure, such as the law of equity, universality and healthcare cohesion and the regulation of the State Public Health Agency (Aesap).

In this time at Health, Darias has shown off applying a co-governance that has not been seen by all the councilors with whom he has met in the Interterritorial Councils of the National Health System, which gradually lost their weekly character as the intensity decreased of covid in favor of other matters such as mental health, whose strategy they finally updated a year ago.

And also to always be on the side of health professionals who, despite this, have not felt rewarded for the gigantic sacrifices made by the administrations during these long years of pandemic.

Darias goes to the Mayor of Las Palmas precisely at a time when the profession has said enough and warns of an imminent collapse of the SNS if no one does anything to improve its conditions. Now it’s up to his replacement to hear the voices.