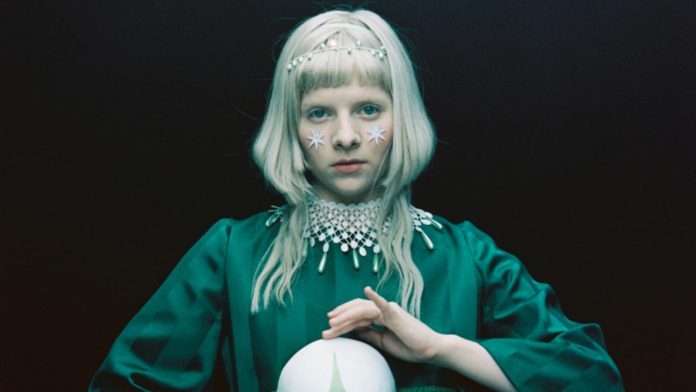 Chronicle of the Aurora concert at the Warner Music Station in Príncipe Pio, in Madrid.

Seeing Aurora live is not a new experience for me. I was able to enjoy his talent and energy on stage in 2018, in Sziget (Budapest), where he gave a fun and powerful show, an experience that I was able to repeat, just one year later, in Roskilde, to a great second day of the festival.

But it was new for me, to be able to see her in a room, and what a room! Warner Music Station, located in the Principe Pio station, has spectacular acoustics, if nothing else, for concerts of this musical quality. I arrived at 19.15, and very kindly, I passed all the press controls to be able to access the room. Here, the first opening act awaited us, Thea WangNorwegian singer and songwriter, who needed little more than a guitar to garner massive applause and the warmth of an audience that seemed completely immersed in the night’s musical experience.

The Scandinavian, has just launched on the market (September 9) his first album, the While He Is Still Asleep, a raw emotional work, with lyrics that talk about love, heartbreak, and the pain generated by these. His music is minimalistic, honest, fragile and very beautiful. Her concert was limited to about 20 minutes, and was interrupted by herself in the middle of a song, asking for help from the security of the room, to help someone who was in the center of the room.

After Thea, and right before Aurora, it was her turn I’m Selina. The singer, with a production more complex and rich in instrumentalization than Thea Wang’s, presented us with a concert of about 40 minutes, in which they paraded tracks like I Adore, Dry Eyes Lie, 1.Minute or Him or Her, among others. His music recalls many things, but feels fresh and his own. Sometimes you found a bit of Lana del Rey, in others, a more carefree Jorja Smith, with Lizzo’s own production, or even Janelle Monae. His career has been focused on releasing singles until earlier this year, where released Him or Her Ep, disc, which in essence, can sound, in some of its passages, to Portishead. A huge surprise, and a top-level opener to wait for Aurora.

And the time came. 15 minutes late, the great star of the night, Aurora Aksnes, took the stage, with a boot focused entirely on his latest work, the The Gods We Can Touch (2022)focused on the issues The Forbidden Fruits of Eden, Heathens and Blood in the Wine. The sound was perfect, the communion with the total audience, and the silence in the room, as respect for the artist, exciting. That changed when he played Churchyardone of the most iconic songs of the Infections of a Different Kind: Step 1. It would be the only song he would play from this album, but the audience finally started dancing and getting carried away by Aurora’s energy.

Between songs, Aurora interacted with the audience, and gave beautiful speeches about individual freedom, the need to love and forgive oneself. The first song from his most iconic album, his debut All My Demons Greeting Me as a Friendwas Warrior. A beautiful experience praised by all the attendees in the room. Which is increased, when The River, was the next song that the Norwegian presented to us in her setlist. Again, positive energy, fun dancing by her, and perfect instrumentalization. The party continues with Cure for Mepossibly his most famous and funniest song from his last album, or at least that’s how the audience in the room felt, since it was the song of the whole concert, received with more jumps and effusiveness of movement.

After this more “fun” part of the concert, a more emotional and introspective one played. It was the turn of the beautiful Daydreaming, which made us all stand on end, due to its fragility and Aurora’s vocal power in some of the song’s passages. It’s one of those songs that ends at the top, and makes you clap like an obsessive. After that would come a themed duet, with Potion For Love and an acoustic version of At Temporary Highwhich were preceded, again, by speeches about love. A Dangerous Thing would be the next item on the setlist, which unfortunately would be overshadowed by the next song of the concert, Runaway. Possibly his most famous song, chanted by the public, and enjoyed by all, as a religious experience.

From the fragility of this section, we pass to the animal and wild power of The Seedone of my favorite topics of his A Different Kind of Human: Step 2which album he would also play Apple Tree moments before, from another of his great works: Running With The Wolves. Personally, the highlight of the night, the most exciting, powerful and tender moment of the entire evening. Three times I’ve seen Aurora perform it live, and it always evokes pure, direct emotions in me. what a wonder

To finish the concert, it remained Giving In to the Lovean ideal epic theme to close a show like the one he’s presented us with so far, although personally, I think closing with Running With The Wolves would be even better.

But there was still a surprise left. Aurora returned to the stage, asking for a certain Borja. And this guy decided to propose to his girlfriend during the concert, to the excitement of the whole room, and of Aurora herself, who ended up crying on stage. As a final closure, and now if, at the concert, he decided to sing Exist for Love for the couple, and thus close a perfect concert in the Spanish capital, which he had never set foot in until now.

To personally thank the Live Nation team and especially María Gaudelia for the good treatment received as a medium.