The increase in coronavirus cases in China should not affect Europe “significantly”, as the variants circulating in that country are already on the continent, according to the World Health Organization (WHO). 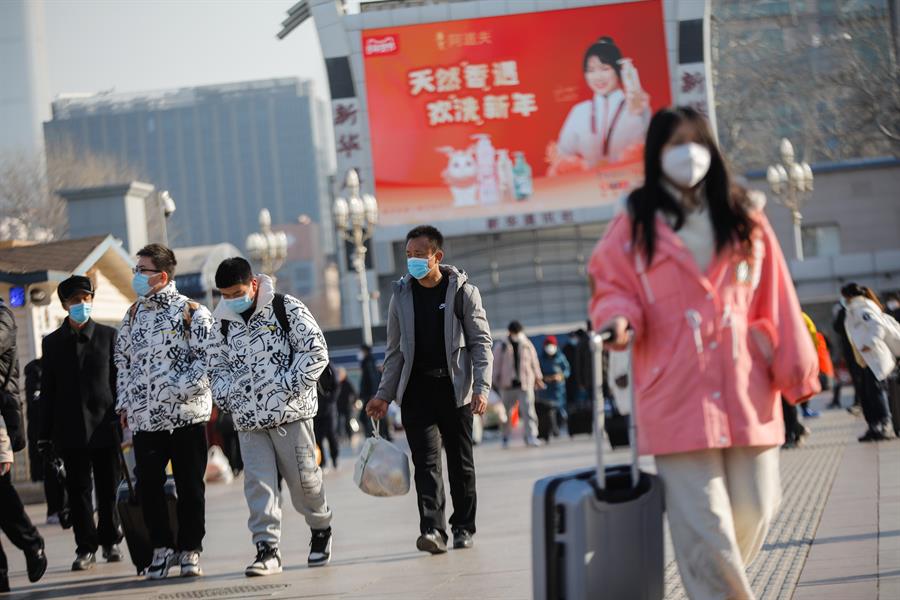 Passengers wearing masks in the vicinity of the Beijing train station. EFE/EPA/WU HAO

“We share the view of the European Center for Disease Control (ECDC) that the current outbreak in China is not expected to have a significant impact on the epidemiological situation” of the coronavirus in Europe at this time, he said on Tuesday of the press the director of WHO-Europe, Hans Kluge.

The ECDC, the reference body of the European Union (EU) for epidemics, had ruled out at the end of last December that the increase in cases in China could be a “challenge” for the continent, alluding to the characteristics of variants and high immunity and vaccination rates.

However, Kluge has emphasized that “detailed and regular” information is needed, especially on local and variant epidemics, to be able to better determine the evolution of the situation.

The top official of the European region – which includes 53 countries on this continent and Central Asia – has acknowledged that China has shared data on genomic sequencing and hospitalization at various levels and has shown confidence that more information will come, which will contribute to increasing public confidence.

The adoption of precautionary measures, especially in travel, that some countries have taken to protect their populations are not “unreasonable”, Kluge pointed out, although he emphasized that they must be based on science, be “provided ” and “non-discriminatory”.

Kluge has urged not to be “complacent” and has considered it necessary to “anticipate, detect and respond” in time so as not to put more pressure on health systems exhausted after three years of the pandemic.

The head of the WHO in Europe has called for reinvestment in genomic surveillance, including wastewater monitoring, and to protect health workers from the coronavirus outbreak in China.

But he has also insisted on increasing the vaccination of the population, administering additional doses to priority groups, promoting the use of masks indoors and in public transport and ventilating crowded spaces are some of the WHO’s recommendations, which he has recalled have been “very effective”.

Sanitat detects the micron subvariant XBB.1.5 on a timely basis in Spain

The Ministry of Health has reported that in Spain cases have been detected “in a timely manner” of the new micron subvariant, the XBB.1.5, informally known as Kraken and already found in the Basque Country and Madrid, which is being expanding weeks ago in the United States and some European countries.

According to the epidemiological report of the Center for the Coordination of Health Alerts and Emergencies (CCAES) published by Sanitat, the XBB.1.5 lineage, which comes from the XBB already detected weeks ago but without having proliferated, “is expanding” mainly in the United States “where it would have exceeded 25% in the first week of January”.