Curdled milk occurs when the proteins found in milk break down, usually as a result of acidity or excessive heat. The resulting liquid can be lumpy and unpleasant, but it can also be recovered if you know what to do with it. Indeed, cooking with curdled milk can produce delicious dishes, despite the lack of appetizing appearance. As long as you take certain precautions when handling and cooking with curds, you can create dishes like cheese sauces and cheese toppings, creamy soups, and quiches.

What is curdled milk?

Curdled milk is milk that has been thickened and soured with the help of acid. It usually occurs when milk is exposed to acidic ingredients, such as lemon juice or vinegar. The milk proteins will coagulate when mixed with these ingredients, resulting in a thick, lumpy texture. Curdled milk can be used for various cooking purposes, so let’s explore how it can be used.

Curdled milk is simply regular milk that has been separated into solid curds and liquid whey. This change can occur as a result of a variety of different conditions, ranging from extreme temperatures to added acids or enzymes. In most cases, it is completely harmless to consume, but it can change the texture and taste of your recipe, in some cases for the better, which is why some recipes call for it.

Curdled milk occurs when the proteins found in milk break down, usually as a result of acidity or excessive heat. The resulting liquid can be lumpy and unpleasant, but it can also be recovered if you know what to do with it.

The most common cause of curdling is adding an acid to hot milk: think citrus juice or vinegar. The acid causes the milk proteins (called casein) to break down and form clumps called “curds” as they separate from the other components such as fat and water that make up the liquid whey.

This effect can also be caused by heat or microbial action, such as when a recipe calls for using yogurt or sour cream as an ingredient. Fermented foods are acidic, so they will cause the same clumping reaction when added to hot liquids like milk. Dairy products themselves can also be affected by bacteria over time, causing them to naturally curdle if they are put out or left out too long without proper refrigeration.
In most cases, this does not make them unsafe to consume, but food safety experts recommend discarding any dairy product that looks lumpy rather than trying to use it in recipes.

Curdled milk, more accurately known as sour milk, can be used for more than just baking. The acidity of sour milk makes it an ideal alternative to buttermilk in baking, but it can also be used to make delicious sauces, savory dishes and even desserts. Let’s explore all the different uses of curdled milk.

Curd milk, also known as fermented or sour milk, can be a little underwhelming in appearance, but it can be used in many applications that require milk. Curdled milk has a slightly sour taste and is thickened by the reaction between acidic ingredients, such as lemon juice or vinegar, and the protein in the milk. When cooked with curdled milk, it can improve the texture of food while enhancing its flavor.

Curdled milk can be used as an alternative to fresh milk when preparing mashed potatoes. In this application, replace one cup of fresh milk with two tablespoons of white vinegar plus enough curdled milk to make one cup total. The addition of sour or fermented milk adds an extra tangy flavor to mashed potatoes while giving them an improved texture.

Curd milk is an ideal cooking alternative for consumers who are lactose intolerant or who are looking for something new in their culinary experiences. Thickening sauces with curdled milk is a great way to increase the rich flavor and texture of many dishes that call for cream sauces, such as creamy macaroni and cheese recipes and meat dishes cooked with cream sauce bases. You can also use curd instead of traditional cream or fat-free ingredients when making treats that require creaming stages, such as cookies and cakes; however, it will not whip like traditional heavy cream will.
The nutty flavor created by using sour or fermented dairy products makes most foods more interesting; however, replacing all fresh dairy ingredients with fermented dairy products should be done with caution because allowing fermented dairy products to sit for too long can create off-flavors in foods.

Curdled milk can be used to enliven two types of soups: cream-based and cream-free soups. To make a cream-based soup tastier, try adding small pieces of curdled milk to the broth. The lumpy texture will add body to the soup and help thicken it.

Soups without cream also benefit from a little curd. Finely chopped pieces can be a delicious addition that adds texture, flavor and nutrition to the dish. Simply sauté some thinly sliced ​​onion in butter before adding a handful of chopped curd and cooking until golden. Then add whatever broth or stock you like, season modestly with salt and pepper, and serve hot!

Curdled milk can be used to create several different sauces. A classic béchamel sauce can be made by combining equal parts flour and butter, whisking it with half a liter of warm curdled milk until completely smooth, and adding salt, pepper and/or herbs to taste.

The same technique is used to make the classic cheese sauce for macaroni and cheese dishes; in this recipe the flour and butter are combined by melting them in a pan before adding the curdled milk. Once the desired creamy texture is achieved, grated cheese is added to enhance the flavor of the sauce.

Curdled milk can also be used to make béarnaise sauce, a classic French side dish for beef tenderloin or grilled asparagus. This involves heating white wine vinegar with tarragon sprigs, shallots and peppercorns before scraping them into a separate bowl and setting them aside until they cool slightly. The egg yolks are then whisked with curdled milk over a low heat until thickened before gradually incorporating the melted butter that has been flavored with lemon juice and tarragon leaves.

Curdled milk can be used as an ingredient in a variety of baked goods, including breads, pancakes, cookies, and muffins. Milk is sometimes added to these recipes as a leavening agent or to add flavor and texture. It can also be included to improve the nutritional content of foods.

Bread and pancake batters that include curd can be made ahead of time and stored in the refrigerator until ready to bake. The result will still be light and fluffy because the proteins have already set during the curdling process. Cookies made with curdled milk will result in a slightly tougher but still delicious product because the proteins are already cooked by the time they hit the oven.

Muffins made with curdled milk will have less of a surface crust than with regular milk because some of this heat-sensitive protein has been destroyed during baking. However, the muffin centers will still be light, moist and flavorful.

Curdled milk can be used in a variety of recipes and dishes, including baked goods, puddings, custards and soups. Curdled milk has the same properties as fresh cow’s milk and can be used to replace fresh milk in many applications. When curd is used in baking recipes, it helps create a fluffy texture and a slightly sour flavor. It’s also a great way to add protein to your recipes and make them more nutritious.

Curdled milk can be used to enliven two types of soups: cream-based and cream-free soups. To make a cream-based soup tastier, try adding small pieces of curdled milk to the broth.

Many traditional dishes such as cheese blintzes, cheese pasta sauces, Swedish pancakes, spicy creamy soups, pudding pie crusts, French toast, ricotta fillings for pastries rely on milk curd to create its unique flavors. So don’t be discouraged if your milk curdles – it just might end up being your best cooking experience yet!

Tips for cooking with curdled milk

Use it in recipes that call for buttermilk

Curdled milk can be used in recipes that call for buttermilk; however, it is recommended to recreate this characteristic sour taste by adding a few tablespoons of white vinegar or lemon juice to curdled milk for every cup of liquid. These acidic ingredients will help mimic the effect that lactic acid has on regular buttermilk.

However, for recipes that use curdled milk, you need to be careful, as it can negatively affect the final result. The extra acidity of the vinegar or lemon juice can change the flavor profile and texture of what the recipe intended. For most baking applications, curdled milk should be avoided, as these small differences can result in a dry, dense texture; you may want to consider an alternative recipe. 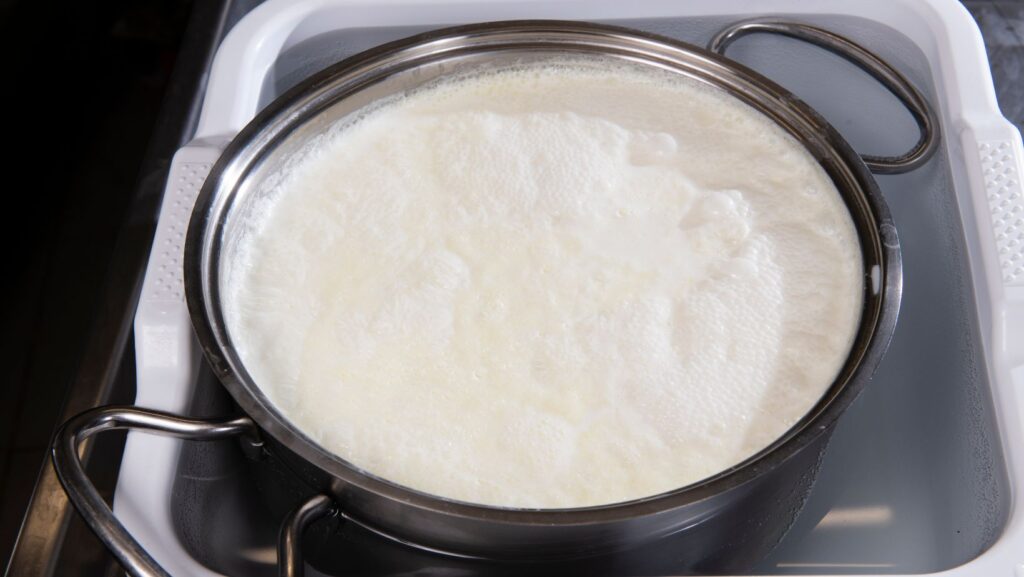 In recipes intended to be savory, such as dressings, sauces, and soups, curdled milk is an acceptable substitute for buttermilk. However, when using spit sauce or any type of hot dairy sauce (such as fondue), you should avoid using curds due to safety concerns with raw dairy products when heated to high temperatures . Finally, remember to compensate accordingly in terms of consistency with other ingredients rather than the thicker consistency of buttermilk when substituting curd; some adjustments may need to be made during preparation and cooking.

Use it in recipes that call for thickening

When cooking with milk that has been soured or curdled, one of its main uses would be as a thickener. For example, you can use it to make sauces, puddings and dips. Curdled milk tends to react more easily to heat than regular milk, so the behavior is more predictable when added to a recipe that calls for thickening.

It is important to note that using this thickening method can affect the flavor of the dish. Curdled milk generally has a sour taste and does not provide as much sweetness as undamaged milk. However, with the addition of spices and other ingredients within a recipe, the presence of curds may not be too noticeable within the final product.

It is also important to remember that further cooking will discourage curds in most cases. For example, if you’re making a pudding or sauce with curdled milk and heat it in a saucepan to boiling point or a bit further, the undissolved bits are likely to dissolve completely. This can help minimize any flavor impact due to bacteria present in spoiled or sour milks