The animal cell is the building block of all animal structures. It is a type of eukaryotic cell, which is characterized by having a nucleus where the genetic material is enclosed in the form of deoxyribonucleic acid or DNA.

The animal cell has different parts with specific functions, as shown in the table below:

Each of the parts of the animal cell and what they are used for are described below. 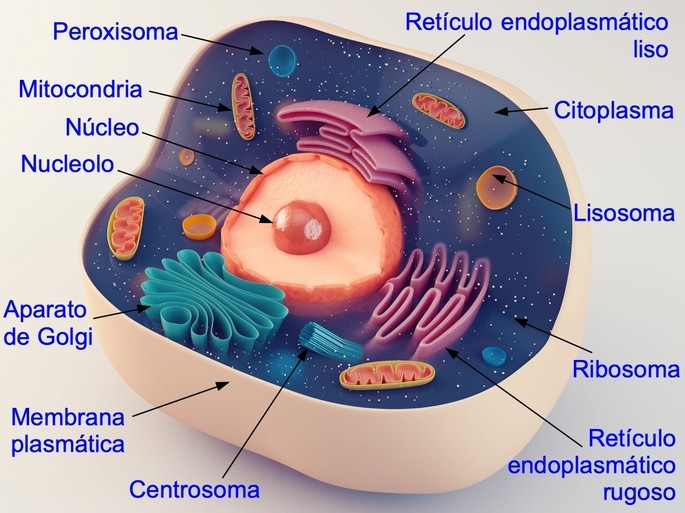 The plasma membrane or cell membrane is the outermost part of the cell that limits and encloses its contents, separating the extracellular environment from the cell interior. Its structure is fluid and dynamic, made up of a double layer of lipids, mainly phospholipids and cholesterol, and proteins.

One third of the cell’s proteins are found in the plasma membrane. These are responsible for perceiving external conditions or signals and sending this information inside, so that the cell can respond to the stimulus. Other proteins allow the passage of elements such as sodium and calcium, so that the cell can carry out its activities.

The cytoskeleton is attached to the plasma membrane, in order to maintain the shape of the cell and the movement of the intracellular structures.

In the nucleus, you can also distinguish chromatin, which is nothing more than DNA bound and packaged to nuclear proteins.

Inside the core is the nucleolus, present in all animal cells, except those that have lost their nucleus, such as red blood cells. The main function of the nucleolus is the production of ribosomes. In growing or cancerous cells the nucleolus increases in size.

The cytoplasm is the space that surrounds the nucleus to the membrane. Within the cytoplasm are submerged the organelles of the cell and the skeleton of microtubules.

Cytoplasm is composed of:

The endoplasmic reticulum is the largest organelle in the cell. It is a constantly changing structure of membranes. It participates in the modifications that proteins and lipids have during synthesis and after they are synthesized. It also plays a role in cellular calcium homeostasis.

The endoplasmic reticulum can be divided into:

Ribosomes are small dense granules of RNA and protein. Its main function is the synthesis of proteins following the directions of the DNA.

There are free ribosomes in the cytoplasm and ribosomes attached to the membrane of other organelles, for example, the endoplasmic reticulum. Some free ribosomes form groups of 10 to 20 forming polyribosomes.

The Golgi apparatus or Golgi complex consists of a series of stacked curved sacs that continue into the endoplasmic reticulum. It is responsible for receiving the proteins synthesized in the rough endoplasmic reticulum, modifying them and packaging them in vesicles to transport them to the places where their function is required. 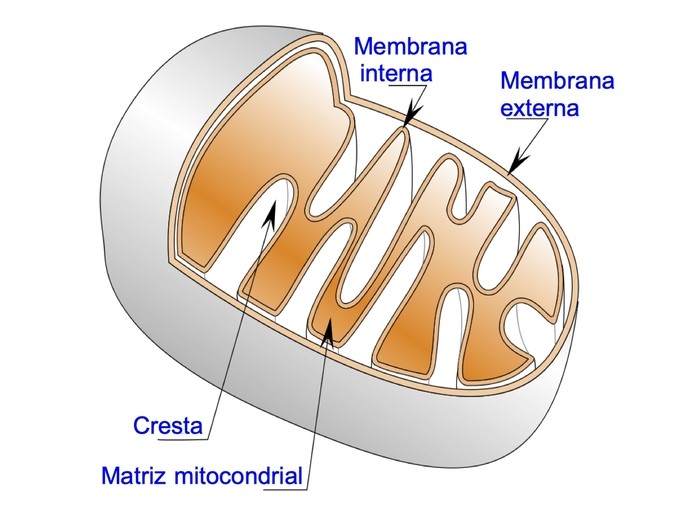 Muscle cells form long networks of mitochondria for rapid and coordinated energy production. In the neuron, the mitochondria in the postsynaptic dendrites are larger and more interconnected.

Lysosomes are a heterogeneous group of vesicles of different sizes and contents. Their main function is the digestion of the external or internal material of the cell, so they are considered a kind of cellular stomach. It does this thanks to various enzymes that degrade proteins, carbohydrates, lipids and nucleic acids.

Lysosomal enzymes are produced in the endoplasmic reticulum, mature in the Golgi apparatus, and are transported to the cytoplasm in small vesicles, known as primary lysosomes. Mature lysosomes fuse and divide, making them a dynamic compartment.

Lysosomes are present in all animal cells except the red blood cell. The degradation of endocytosed or autophagocytosed materials takes place within lysosomes that have an acidic pH between 4 and 5. After the enclosed material is degraded, the lysosomes enter a “resting” state.

The peroxisome is a membranous organelle that participates in oxidative metabolism. In mammals, abundant peroxisomes are found in liver and kidney cells.

Peroxisomes participate in the oxidation of fatty acids, in the synthesis of myelin lipids and in the removal of hydrogen peroxide from cells.

When there are faults in the functioning of peroxisomes or they do not exist, a disease called Zellweger syndrome occurs.

The centrosome is a nonmembranous organelle that serves as the microtubule organizing center. Facilitates cell motility, polarity, shape maintenance, cell division, vesicle transport. In interphase or the phase of the cell where it is not dividing, the centrosome is close to the nucleus.

The centrosome of a mammalian animal cell consists of a protein scaffold that surrounds a pair of cylindrical centrioles.

You may also be interested in seeing Mitosis and Meiosis.

The cytoskeleton is a flexible three-dimensional structure made up of protein filaments. Depending on the thickness of the filament, they are classified into microfilaments (7 nanometers (nm)), intermediate filaments (10 nm) and microtubules (25 nm).

The cytoskeleton maintains the shape of the cell, allows the movement of cilia and flagella and participates in the intracellular transport of organelles.